Realme has today unveiled the launch date of its X7 series, as promised. The upcoming smartphones will land on September 1 at 2 PM local time in China. The series will consist of vanilla and a pro version – Realme X7 and X7 Pro. The company took to Weibo to announce the launch date of the phone.

The coming X7 series will come with 5G support and a 120Hz AMOLED screen. These woild be the first phones by the company to launch with 120Hz LCD panels. The poster shared by Realme includes a render of a smartphone with slim bezels. 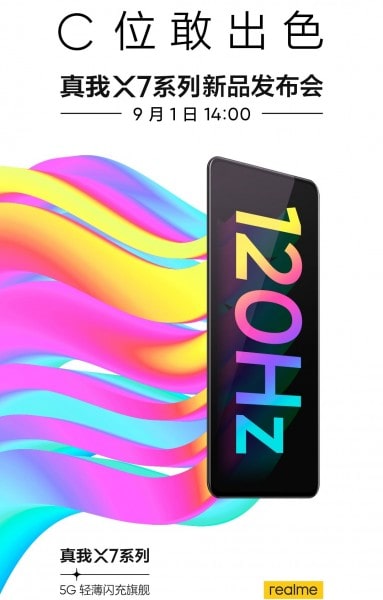 The poster also has Chinese text that translates to “thin and light flash charging flagship”, meaning the X7 series may come with a flagship chipset and hopefully 125W UltraDART charging.

Furthermore, Realme’s Weibo post in Chinese has text that translates to “flexible AMOLED screen”. It is for sure now that Realme X7 and X7 Pro are not foldable smartphones, both will come with the screens with curved edges.

As the company has planned to unveil the series on September 1. We may get more official information about the phones in the coming days.

The specs we come to know so far clearly indicates that these will be high-end devices especilly the Pro version. In my opinion, the Pro version will be a high-end model and its sibling will be a midranger. Let’s wait and see what other specs both these phones will have. Till then stay tuned for more updates.