Reasons why Lumia 920 is better than iPhone 5

Lumia 920 – better than Apple’s recently launched iPhone 5, which has broken all sale records by topping two million pre-orders in the first 24 hours. Nokia claims that Lumia 920 is better than iPhone 5 and has compared different features of both gaints in a Facebook post.

Reasons why Lumia 920 is better than iPhone 5: 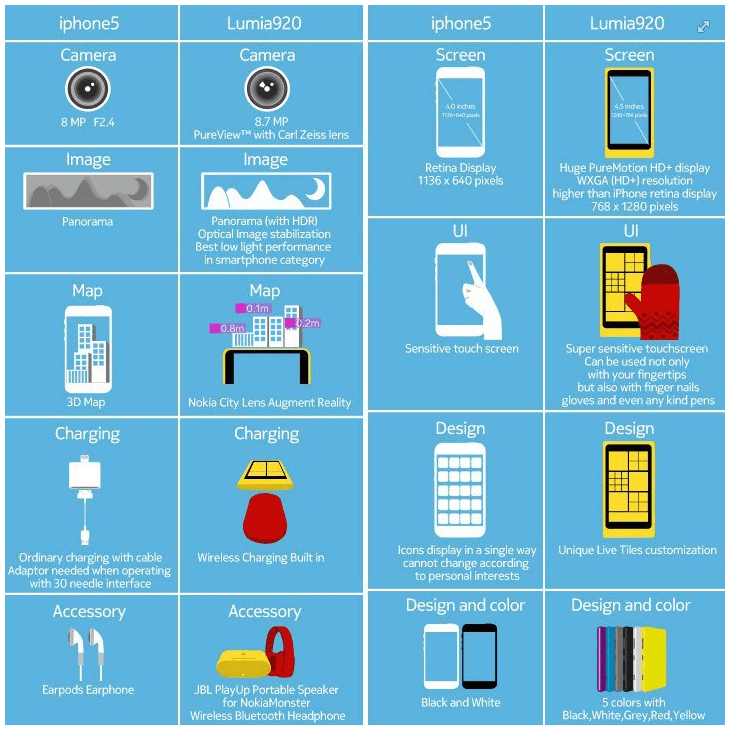 3) Design:
Lumia 920 offers matchless Live Tiles customization, unlike the iPhone 5 on which icons are displayed in a single way, which can not be personalized.

4) Image:
Camera of Lumia 920 and iPhone 5 both offers a Panoramic mode to let users shoot a single photo covering as much as 360 degrees, but Nokia has an upper hand on image stabilization.

5) User Interface:
The Lumia 920 has a super sensitive touchscreen can be used not only with your fingertips, but also with finger nails, gloves and even any kind of pens. Which lacks in iPhone 5.

7) Design and Color:
The Lumia 920 has a variety of colors, it offers black, white, grey, red and yellow colours. Whereas, the iPhone offers white and silver, and black and slate colors.

8) Accessory:
Nokia Lumia 920 offers more accessories as compared to what Apple offers with the iPhone 5.