Chinese Smartphone Manufacturer, Huawei has witnessed a Tremendous Increase in 4G market share in Pakistan 2018. With around  130 million smartphone devices sold last year, Huawei has certainly taken a stride in the smartphone market. Previously Pakistani Market was captured by Samsung but with time Pakistanis interest in Samsung devices faded off as they got the smartphones with the same specifications at cost effective prices. This resulted in shrinking Samsung Sales in Pakistan. 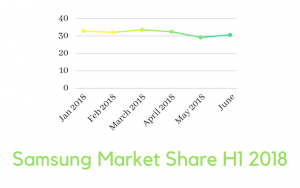 When it comes to global analysis of market share, South Korean tech giant Samsung Electronics Co Ltd estimated earnings grew at the slowest pace in more than a year in the second quarter of 2018.

Here’s why People have lost interest in Samsung Smartphones:

Samsung Smartphones are usually expensive as the brand has made a name in the market and is counted in influential old brands. Most of the people in Pakistan cannot afford such expensive devices so they refrain to buy it.

Initially, when the smartphone market flourished in Pakistan, Samsung and Apple were two names that were prominent. As no options were available at that time people had to buy any of these devices. Now other brands like Huawei, Xiaomi, Qmobile, Oppos are offering devices with the same features and Samsung. Even these brands offer the same features at cost-effective prices. NowBrands like Huawei, Xiaomi are beating the budget segment of 4g smartphones with low prices and same or even better specs. People are looking for phones that offer the best value for their money.

Samsung is facing increasing competition from Huawei, who has made no secret of its plans to become the number one smartphone manufacturer worldwide. Huawei in no time has made its named and has won many hearts.

Chinese smartphone makers like Huawei, Xiaomi, and OPPO continue to eat into its sales. The phones that these companies produce are often far less than the cost of Samsung’s flagships while providing similar build quality and software experience.

From last 2 years, Samsung is going through bad times. Initially, the battery of flagship Note 7 exploded which revealed that the device had some issue. The company had to recall all devices back to fix the issue. However when the people were provided with new devices, even they caught fire, sinking Samsung’s name.  August 2017 was the most difficult time of Samsung when they were accused of selling phones with exploding and draining batteries.

Samsung has launched Note 9 this month and it has a light leakage problem. Due to these major errors in a flagship device, people have lost their interest in it and have shifted towards other brands.

The scandal of Samsung VC:

In August the hair, Lee Jae-young was sentenced to five years in prison on bribery charges. Lee faced longest-ever jail imprisonment in South Korean history, being a vice president of a tech company. This also brought a bad image on Samsung and this was also a minor reason why people refrained from buying Samsung mobiles.

No doubt, Samsung market share is shrinking in Pakistan. However, after all this, Samsung is still at an advantage being the world’s largest chipmaker by revenue, ousting Intel from its 25-year reign as the industry’s foremost supplier of semiconductors. At $69 billion in revenue from its semiconductor business in 2017, Samsung easily bested Intel’s record annual sales of $63 billion.