Samsung is all set to unveil the Galaxy Note 9 in New York City on August 9. The handset has been in the news since the last few months. According to the sources the Samsung Galaxy Note9 will launch in five color variants Black, Silver, Lilac Purple, Brown and Coral Blue. The recent exclusive render shows Samsung Galaxy Note 9 Coral Blue, which will be introduced at the launch event.

The leaked image was first appeared on Quandt and also shows off the product’s retail packing. 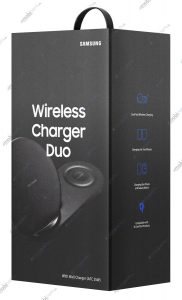 The render shows a typical Samsung black retail box with the phone name. On the front of the box, the Wireless Charger Duo looks like Samsung’s current wireless charging stand but there is also an added side piece.

In addition the packaging details that the secondary Qi charging pad could be used to charge a second phone and Samsung watch. The highlighted specs are listed on the back of the box the screen size, the dual 12MP camera, the wireless charging abilities, the IP68 water proofing.

The Coral Blue variant is a lighter shade of Blue than the Deep Sea Blue. The accessories inside the box are identical to a Galaxy Note 8 box such as AKG earphones, Adaptive Fast Charger, USB-C cable and USB-C dongle for file transfers.