Xiaomi has revealed the Redmi K20 series back in May. Now, the company has announced to expand the K-series by launching K30 in the next month. Redmi K30 with 5G support will Launch on December 10. Redmi VP and General Manager Lu Weibing, has announced this on Weibo today. 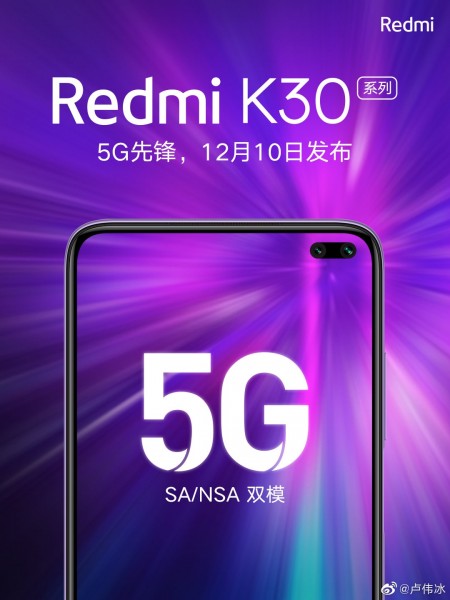 The other thing that we know about the phone is that it will support dual-mode 5G. This will be the first phone from Redmi with such feature.

He also revealed that K30 will sport a display surrounded by slim bezels on three sides. However, the fourth side will have an oval-shaped hole in the upper-right corner for the dual selfie camera.

As far as the other specs are concerned, it will have Qualcomm’s Snapdragon 7xx series chipset. Moreover, the other rumours have revealed that it will have a 120Hz display. The 3C certification has also confirmed that the K30 will come with 30W fast charging support.

Unfortunately, this is all that we know so far about the phone. But surely, we will get more details about the Redmi K30 series in the coming days. Till then, stay tuned for more updates.