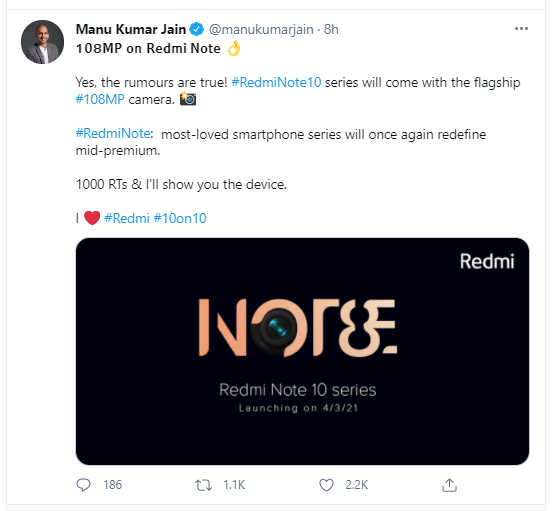 Xiaomi reveals the Redmi note 10 series camera feature via a Twitter post. The first 108MP flagship camera is said to be in the series. There are expected two or more variants in the note 10 series, all models would most likely have the 108MP camera flagship.

The only other device at a reasonable price is the Mi 10i 5G, which has a 108MP camera. Whatever the case, it seems that the 108MP sensor actually got jammed into the high-budget phones.

Xiaomi Redmi revealed upcoming series another key feature that all Note 10 series models will be powered by Qualcomm Snapdragon Processor. The Redmi Note 10 series is expected to shift over to the AMOLED display this time. The expectation is that a Snapdragon 768G 5G chipset would be powered but it’s not confirmed yet. The Note 10 indicates that the device will have storage options of 4GB+64GB and 6GB+64GB. Also, this series is expected to have a 5G technology. Now, let’s wait for the next few days for more information.

You may be also interested in: Xiaomi Introduces a Power Bank for iPhones with 10,000 mAh Capacity