After getting a lot of teasers, we finally came to know that Xiaomi’s new 48-megapixel camera phone would be none other than the Redmi Note 7S. Xiaomi is all set to wrap off the handset on the coming Monday. Redmi Note 7s Launch Date is set to be May 20. Recently, Redmi Note 7S live Image Surfaced online boasting the steaming hot Red colored Gorilla Glass 5 back.

Redmi Note 7s Will See The Light On Coming Monday

The brand’s VP Manu Kumar Jain has recently shared one of the live images of the handset. Let’s have a look at that: 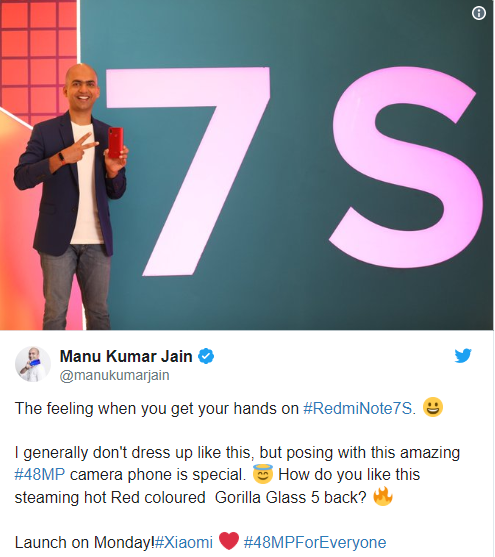 The Redmi Note 7S looks similar to its vanilla version. However, it will come in a new red steaming hot color. The back of the handset will feature the dual camera alignment from the global version with the 48MP main and 5MP depth shooter combo together with the Gorilla Glass 5 protection.

There had been no further official words about the upcoming handset yet. There is only one day left in its launch but still, we don’t know much about the smartphone. The smartphone will join the Redmi Note 7 Family so it is expected to have some specs similar to Note 7 & Note 7 Pro. Let’s see what Xiaomi offers in its new handset.

In addition to that, Xiaomi is also prepping to launch Redmi K20 in order to give a tough competition to the OnePlus 7 pro. Furthermore, Xiaomi has sent out regards to OnePlus and had congratulated them for the launch of new OnePlus 7 Pro. Moreover, Xiaomi claims that its upcoming device will be a Flagship Killer 2.0 that Aims to Face OnePlus 7 Pro. So, let’s see whether the upcoming K20 will be able to knock down OnePlus 7 Pro or not.