The tweet indicates that the Redmi Note 8 2021 has a waterdrop notch screen on the front. The Redmi Note 8 original has the almost same layout. The back panel design of Note 8 2021 is yet to be disclosed. It is still unknown that the backside design of the smartphone is the same as the original or will come with a new design.

The announcement of the Redmi Note 8 2021 is expected in May or June but still, the exact time is unclear. We expect, the company will unveil some more teasers to disclose its other characteristics before official release. 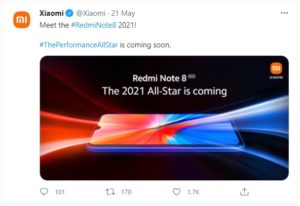 However, recent findings indicate that Bluetooth SIG and FCC certificates have already been passed for the Redmi Note 8 new edition 2021, which has a model number M1908C3JGG. These certifications reveal that the smartphone will have Bluetooth 5.2, MIUI 12.5, and 4,000mAh battery power. The phone’s strong battery could be paired with fast charging of 22.5W.

It has been rumored, the new device to have an LCD panel supporting the resolution of FHD+ and a 120Hz refresh rate. The MediaTek Helio G85 SoC is supposed to offer 4GB RAM on the smartphone. May be device will also available with more storage options such as 64GB and 128GB.

This device is expected to have a 48-megapixel quad rear camera setup. More details are still unclear about the release date and market, where the smartphone will debut.