CEO and Founder of Facebook, Mark Zuckerberg said his social network’s removal of actor Hamza Ali Abbasi’s status regarding the Charlie Hebdo attack and freedom of expression may have been a mistake.

Pakistani actor and director Hamza Ali Abbasi on sunday said that Facebook authorities deactivated his profile and removed his status in which he had condemned the killings at the Parisian office of satirical weekly Charlie Hebdo. When asked what Zuckerberg has to say about his network’s deletion of Hamza’s post, Mark Zuckerberg responded: “I don’t think this should have been blocked. Our team might have made a mistake. Justin, can you look into this?”

In response to which, Zuckerberg tagged Justin Osofsky, the Vice President of Global Operations and Media Partnerships for Facebook. 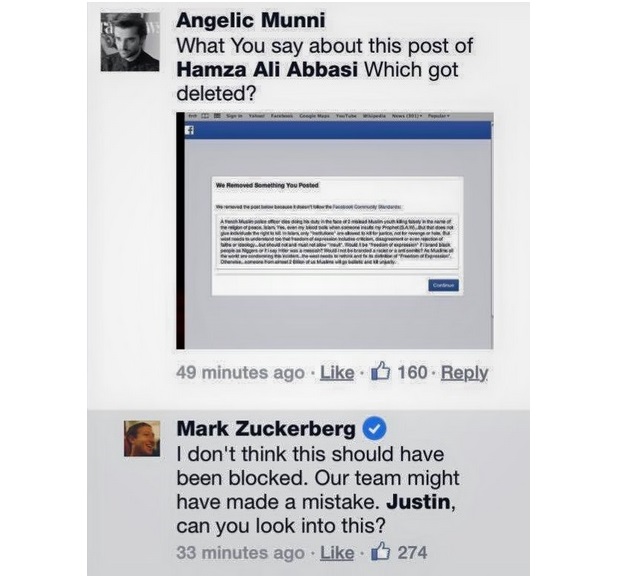 Hamza posted a screenshot of the deleted post on Sunday along with Facebook’s notification that said they had removed it since it violated the social networking website’s community standards.

In the status shared on his verified Facebook account – which has over 1.6 million followers – he said that while “freedom of expression should include criticism, disagreement or even rejection of faiths or ideology but should not and must not allow “insult”. He also said that West must revisit and fix its definition of ‘freedom of speech,’ otherwise someone from the two billion Muslim population “will go ballistic and kill unjustly”.