In some of the previous leaks, it was assumed that the regular Mate 20 will have the same camera design as that of Mate 20 Pro. Leaks revealed that Huawei’s Mate 20 Pro will adopt a new square-ish camera module on the rear. Regular Huawei Mate 20 camera design was also assumed to be the same but the new leaked renders revealed that this isn’t the case actually. The upcoming variants will feature different camera designs. Recently, new renders showed up confirming Huawei Mate 20 & Mate 20 Pro Camera Layouts.

Huawei’s regular Mate 20 will follow in the footsteps of last year’s Mate 10 Porsche Design. Huawei has included some information that relates to the camera sensors that are included on the smartphone. They will be present above the usual Leica branding and a circular fingerprint scanner. Huawei’s regular Mate 20 will have no in-display scanner. Moreover, Renders clearly show the Huawei’s triple-camera setup. Let’s have a look at that. 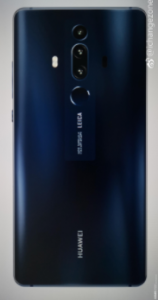 If we go by Huawei’s Mate 20 Pro camera setup, then it will feature two bottom sensors that will be the monochrome and color cameras respectively. The other one will sport a telephoto lens. According to rumors, the sensors will boast resolutions of 12-megapixels, 20-megapixels, and 8-megapixels respectively. Let’s have a look at that. 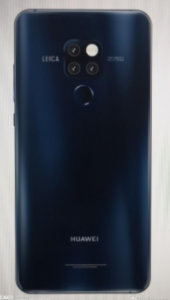 The upcoming smartphones will feature Huawei’s Kirin 980 along with 6GB of RAM and 128GB of internal storage. The handsets will sport a large 4,200mAh battery that will be keeping the lights on. It will sport Android 9 Pie straight out of the box complete with the EMUI 9.0 overlay on top.
Moreover, Huawei’s Mate 20 will become official in the second half of October alongside the larger Mate 20 Pro. There are still no words about the global availability of the upcoming phones yet.