Bill Gates Becomes First & Mark Zuckerberg 6th Richest Man of the World. Like every year, the international forum Forbes has just released its list of richest people of the world 2016. The list comes up with little changes but the top position is again secured by Microsoft’s founder Bill Gates. Whereas Facebook’s CEO Mark Zuckerberg has jumped from 10th to 6th position; having net worth of their organizations $83.9 Billion and $48.9 Billion respectively.

Other than Microsoft and Facebook, some other Technology companies also re-appeared in the ranking list. These include: 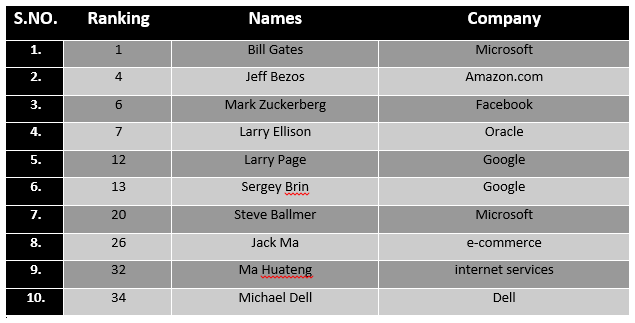 It is important here to note down that some of these companies despite facing losses still manage their ranking; which ultimately shows that how technology is prospering and growing with each passing day across the world. May be in coming years we will witness that the top 10 companies on this list will be technology companies by surpassing the rest of industries.