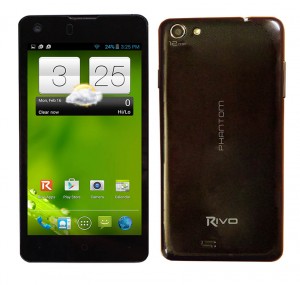 Advanced telecom has launched its own brand in the name of RIVO MOBILE.

Having the knowledge of the overall market of a sharp country regarding mobile phones like Pakistan and having the latest technology with it from the very scratch, Advanced Mobile company ruled over the market in a week after its launching ceremony. Keeping the smartphones with good specifications like a Quad-processor and Ram of 1-GB with a competitive price is a better idea to gain equality in the market and sliding customers to its self.

Rivo Phantom pz10 is a sleek, smart and a cool device that match’s everybody’s personality and the overall features that can fill all the holes of one’s dislikes for a smartphone.

The device is powered with a Quad-core Processor of a leading company Qualcomm that is well set for performing multi-tasking ability for smooth operations and works best under heavy loads like games, media, social medias and much more.

The Rivo Phantom pz10 contains 1GB RAM and 8GB ROM which can be extended to 32GB with a mucroSD Card.

The Rivo Phantom pz10 has a 4.7″ HD IPS Display with capacitive and smooth touch with an impact of best sensation on our eyes.

Rivo Phantom PZ10 is dual sim with one specific for 3G.

It has dual cameras with the rear one having the power to capture 12MP and LED Flash supported. The front camera is 5MP with nice snaps that can be better used for selfies and for chatting over the social media like Facebook, Twitter, Skype, Instagram and many more.

Fitted with a sleek battery for power of 1750 mAh, Battery Guru and Built-in AntiVirus.

The finishing of the Rivo Phantom PZ10 is done with their level best and it comes in two colors of black and white.

The weight of the Phantom pz10 along with the battery is just 100 grams which is also a good feature that certain users do search for.

The Internal Interface or the internal OS of the Rivo Phantom pz10 consists mostly of the default looks and interfaces as do the other smartphones with Android as their operating system have. The Rivo Phantom pz10 is fitted with some built-in apps like world Facebook, Skype, Twitter, WhatsApp, Dailymotion and Youtube etc. The interfaces for the dial pad and for the texts are both used the same as the others smartphones with Android as their root OS, with a blueish theme at the back.

Bench marking the Rivo Phantom pz10 reveals that the device performs fair and is far away in the column of standards.

Antutu is a bench marking application with an overall of more than 100 million downloads and shows the best bench mark after it examines the overall performance of the smartphone.

With the Click and Go test suite, Antutu will comprehensively test all aspects of a device, including UX, GPU, RAM, CPU, I/O and more. Each item is individually assessed and given a score. These scores can be uploaded to the Antutu database, and then used to rank your device among all other Android devices. The overall achievements that Rivo Phantom pz10 obtained with antutu can be clear with the following snaps below. The screen can support touch up to five fingers at once.

Vellamo is a Qualcomm’s testing application. Vellamo is a series of tests designed to evaluate which Android devices deliver the best mobile experiences. The suite provides the user with an overall performance score. That score can then be uploaded and compared to the scores of other devices. The scores, ratings and bench marking for the Rivo Phantom pz10 are given in the following snapshots.

3D Bench is a Video Card Tester application that shows, how fast and efficient images can be created and displayed by the following smartphone. The smartphone, named Rivo Phantom pz10 shows the performance as follows in the images below.