Counterpoint, in their latest analytics, revealed that Samsung shipped the most smartphones in Q1 of 2018. With so many blunders and phones catching fire, Samsung still became the global leader in both smartphone and handset shipments for Q1 of 2018.

Samsung shipped the most smartphones in Q1 of 2018

On the other hand, Apple shipped 52.2 million iPhones and obtained 15% share and stood in the second position after Samsung. Huawei came third with 11% market share including its both Huawei and Honor branded smartphones. 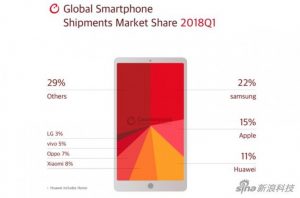 If we consider individual markets, Samsung tied with Huawei, Xiaomi and Oppo for 13% market share in Asia. However shockingly, in the Asian market, Apple stood the fifth position with market share of 12%. This is very surprising to know that even the Chinese smartphone brands overpassed Apple in this particular region.

However, in its home market of North America, Apple performed very well and acquired the market share of 40%. In the very same region, Samsung is second with 27%. However in Europe, again Samsung took the lead with 33% share whereas Apple came second with 20%. 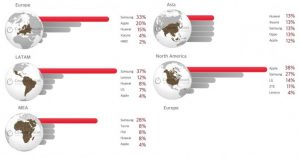 When it comes to total feature phones shipments, Samsung attained 17% of the share however Apple stood second with 11%.