From last few months, we are hearing that Samsung is about to release foldable Samsung Galaxy X. This was expected to be the first ever foldable device with a flexible display. Finally, we have got glimpses of Samsung foldable phone, but one with two separate displays.

The images were leaked by Slasleaks, a Chinese Twitter user. He told that Samsung Foldable phone will launch under the codename Project V, also know as project Valley. This phone was expected to launch in 2016 however as Samsung was not read, Galaxy X was delayed. 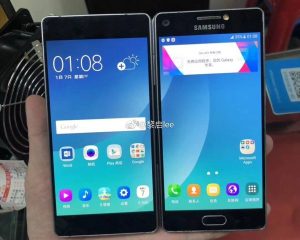 The leaked images revealed that there are no Three OLED panels which were promised before. Unexpectedly leaked image of Foldable Galaxy X was the same as the prototype launched in 2015. The main phone display is also very thick compared to its second foldable screen. Foldable Galaxy X is same as ZTE Axon M which was launched 1 year back.

The device looks clunky and chunky and resembles two early 2010-era Samsung Galaxy phones glued together. It looks a lot like the ZTE Axon M, another thick foldable phone that uses two screens connected by a hinge.

Right now we cannot confirm whether that these images are of real prototypes for Samsung’s Project V foldable phone.

Samsung is not the only player, who is soon to conquer the smartphone market with the Foldable phone. There are other smartphone giants who have joint the Samsung’s race such as Huawei, LG, Apple and Motorolla. Thinking out of the box, let us tell you that among the foldable smartphone family, Samsung is the only one to launch Three screens foldable Galaxy X so it will definitely win the market. Many people were anxious to know that What will be the cost of Samsung Foldable Galaxy X.

Also Read: What will be the Cost of Samsung Foldable Galaxy X?