The International Olympic Committee (IOC) and Samsung Electronics Co., Ltd., the Worldwide Olympic Partner in the Wireless Communications Equipment category, announced it has signed an agreement to extend their partnership through to the 2020 Olympic Games. The signing ceremony took place on August 25th in Nanjing, China, the host city of the 2nd Summer Youth Olympic Games. IOC President Thomas Bach and Jay Y. Lee, Vice Chairman at Samsung Electronics attended the ceremony.

[blockquote cite=”Younghee Lee, Executive Vice President of Mobile Marketing, IT & Mobile Division at Samsung Electronics”] Samsung aims to spread the Olympic spirit through our innovative products, enabling all fans around the world to stay connected and share the excietment of the Olympic Movement. We are proud to extend our involvement as it is meaningful to us to inspire people through the passion that lies behind the Games and contribute to creating a smarter Olympic Games.
[/blockquote]

[blockquote cite=”Thomas Bach, IOC President”] We are delighted to be able to continue our partnership with Samsung. The funding generated by the TOP Programme directly supports the staging of every Olympic Games, as well as every one of the National Olympic Committees, enabling athletes from all over the world to prepare for and compete at each Game. Samsung also supports the operations of each Game by providing leading wireless telecommunications and technology equipment. In addition, Samsung’s technologies and global marketing reach will engage fans around the world with the Olympic values and the Olympic Movement.
[/blockquote] 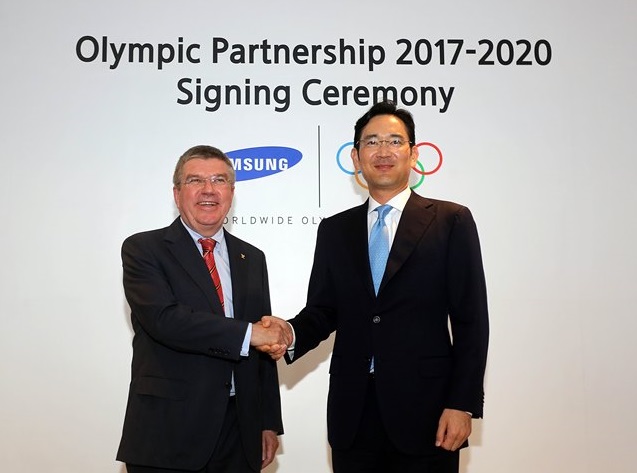 As mobile technologies have become an inseparable part of our daily lives, Samsung believes its continued support will play a significant role in bringing further innovation to the staging of the Olympic Games.