Samsung Galaxy A5 (2017) is now receiving Android 8.0 Oreo update ahead of the schedule. The new update is coming with Samsung Experience 9.0 along with a improved performance and tweaks.

This device was launched in January 2017. At that time it was introduced with Android 6.0.1 Marshmallow and an update to Android Nougat.

The update is said to be come in 1.2GB and brings software version A520FXU4CRD5/A520FOXE4CRD3/A520FXXU4CRD3. The latest Android version includes Samsung Experience 9.0 that uplifts the original interface and has an improved keyboard. This improved keyboard brings standard emoji characters, GIFs, and stickers. You will also find Bixby automation features and improved security integration. These reports are based on screenshots uploaded on the internet. 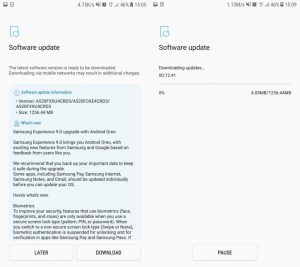 Users should back up their data before the update process. The Samsung Galaxy A5 (2017) Android 8.0 Oreo update needs the latest version of some preloaded apps, such as Samsung Pay, Samsung Internet, Samsung Notes, and Email, that can be install individually.

The new update brings stability of the smartphone with improved performance. For the improvement of the security of the device, Samsung has decided that when secured lock screen methods such as pattern, PIN, or password are used then only in that case biometrics related features will be available. Features like Samsung Pass and Samsung Pay will not be available when there is less secure screen unlock methods like none or swipe are used. Android 8.0 has also features like app shortcuts, password AutoFill, picture-in-picture, Android Instant Apps, Adaptive Icons, and Google Play Protect to the phone.

The other devices like Samsung Galaxy S7 and Samsung Galaxy S7 edge are soon to receive the updates. The Android 8.0 Oreo update for the Galaxy A5 (2017) is initially rolling out in Russia and Romania, and is expected to expand soon in other countries.