We all know that a Galaxy event is going to be held on October 11. According to the recent reports, Samsung is all set to launch its two Galaxy Phones at the event. The recent leaks suggest that the two Samsung Galaxy Phones that are expected to launch at the event are Galaxy A9 Star Pro and Galaxy A7 (2018). Recently, the company issued a press release announcing the Samsung Galaxy A7(2018) with triple camera setup. It is Samsung’s first ever triple camera smartphone.

The Galaxy A7 (2018) accommodates a 6-inch Super AMOLED display with 1080 x 2220 pixel resolution. The smartphone has no notch. In addition to that, the phone uses an octa-core 2.2GHz CPU paired with the Exynos chipset which is claimed to be varied by the regions.  Furthermore, it will come in three different memory configurations that are 4GB/64GB, 4GB/128GB or 6GB/128GB. 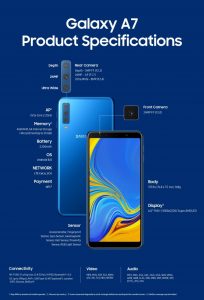 Obviously, the centerpiece of this year’s Galaxy A7 is the triple camera setup on the back. The smartphone features a 24MP primary sensor behind a f/1.7 lens, an ultra-wide 8MP f/2.4 module with a 120° viewing angle and a 5MP depth sensor. Furthermore, it’s all tied up by Samsung’s Scene Optimizer. 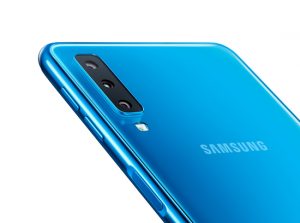 The smartphone sports a massive 3,300 mAh battery. Moreover,  it runs Android 8.0 out of the box. The midrange smartphone is made of premium glass material. In addition to that, the fingerprint scanner is mounted on the sides. Moreover, the Samsung Galaxy A7 (2018) offers a slightly curved front and glass back. Galaxy A7(2018) color options are blue, black, gold and pink.

Also Read: Here are the Leaked Pictures of Samsung Galaxy A7( 2018) with Three Cameras