There had been a lot of rumors and leaks about Samsung’s Upcoming handset Galaxy A8s for many months. A few days back, Galaxy A8s renders showed up that unveiled the complete design of the upcoming Galaxy A8s device with the Infinity-O display. After that, Galaxy A8s New Leak surfaced on the internet.  It offered a closer look to the Infinity-O Display and punch hole of the smartphone. It also got certified by FCC. Recently, Samsung published a poster on Weibo confirming the launch date of the handset. Samsung Galaxy A8s Launch Date is set to be Dec 10 by the company.

Samsung Galaxy A8s Launch Date Is Decided To Be Dec 10

Huawei is going to launch their upcoming Phone Nova 4 on Dec 17. So, Samsung has planned to release their phone before Nova 4 Launch. A poster surfaced on Weibo that unveiled the launch date of Samsung Galaxy A8s. Let’s have a look at the poster. 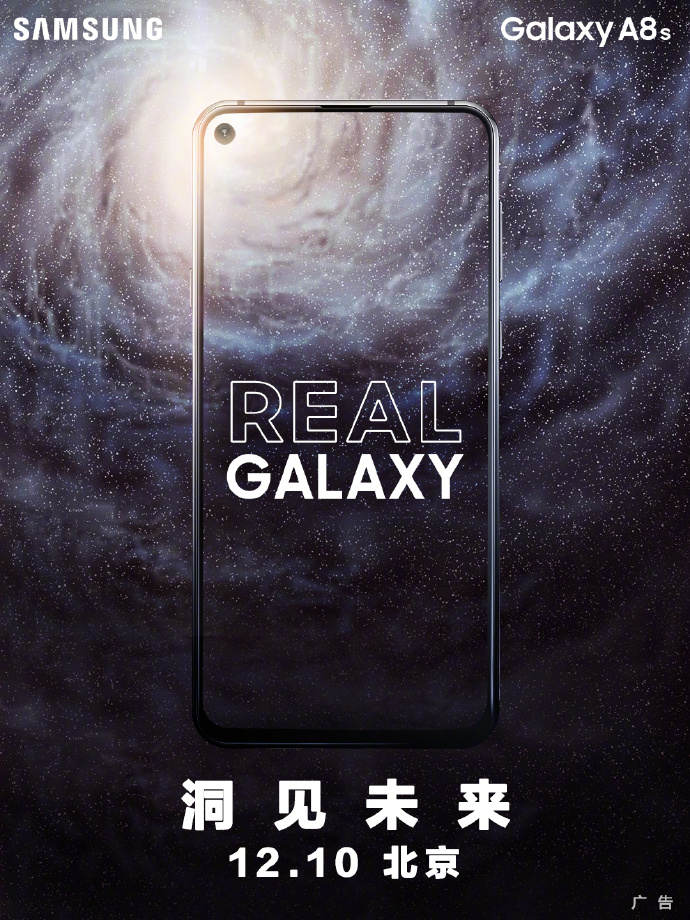 According to the previous leak, the Galaxy A8s will have an Infinity-O design panel with the camera and sensor hole in the top left corner. So, now Samsung will come up with Display Hole Designs in their upcoming devices. Samsung Galaxy A8s is expected to have the 6.39-inches FullHD+ Super AMOLED display and it will have a significantly higher screen to body ratio. This upcoming smartphone is expected to be powered by the Snapdragon 710. In addition to that, it will come with 6GB of RAM and 128GB of internal storage.

The rumors said that the Galaxy A8s will come with a triple camera on the rear. Samsung Galaxy A8s is tipped to have 24-megapixel, 5-megapixel, and 10-megapixel sensors at the back. At the front, there will be a 24-megapixel sensor that will be placed in a display hole. However, there are no official words about its specs by Samsung yet. Let’s see what comes next.