The tech giant, Samsung launched the most awaited flagship series, Galaxy S10 series almost a month back. Now, the company is prepping to launch Galaxy A-series phone, Galaxy A90 very soon. We had been getting a lot of leaks about this highly anticipated handset for many weeks. Furthermore, OnLeaks also revealed major details regarding the upcoming device. Recently,  Samsung Galaxy A90 Specs Got Leaked by a Weibo User.

Galaxy A90 Specs Surfaced On Weibo

A Weibo user Martian-V leaked the specs of the upcoming handset. Let’s have a look at that. 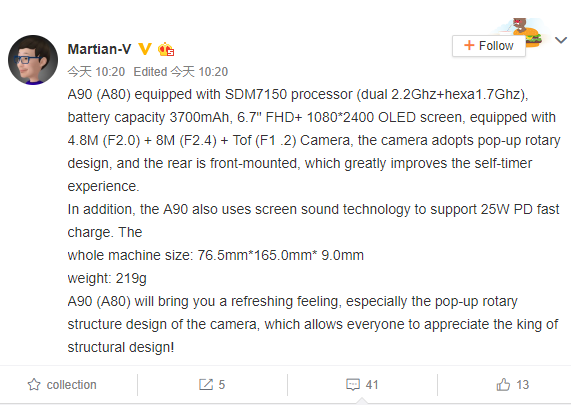 According to the leaks, the Galaxy A90 will feature a 6.7-inch display just like the Galaxy A70. The display will be an AMOLED panel with a 2400 x 1080 resolution. However, the upcoming handset will not come with a notch at the top of the display for the selfie camera. The SDM7150, an octa-core chipset with two cores clocked at 2.2GHz and six cores clocked at 1.7GHz will power up the handset.

The upcoming flagship phone, Galaxy A90 will also support 25W fast charging and USB Power Delivery. The handset is tipped to measure 76.5 x 165 x 9 millimeters and weighs 219 grams. Samsung’s Galaxy A series event is scheduled for April 10. We are hoping to see this new phone at the event. Let’s see what comes next ahead of its launch.