We all know that Samsung is all set to announce the world’s first quadruple-camera smartphone tomorrow in the “4x Fun Event”. The new smartphone is also part of the Galaxy A series with four snappers on the back. It is set to be known as the Galaxy A9s in some Asian market and potentially the Galaxy A9 (2018) in Europe. Galaxy A9s is expected to launch with a set of premium features. Recently, the reliable tipster Evan Blass posted an image of the device. Official images of Samsung Galaxy A9 with Four Cameras confirms that the rumors of the upcoming Samsung device having four cameras were true.

Here is the Image of Samsung Galaxy A9 with Four Cameras

The Samsung Galaxy A9s  is set to become the world’s first smartphone with four rear camera sensors. Samsung’s first quad camera phone will have four sensors for the rear camera. The primary camera of the smartphone will have 24 MP with f/1.7 lens. It will boost the “Clear & Bright” technology, something that will presumably enhance images in low-light scenarios. The 5 MP depth sensor will have a f/2.2 aperture with Live focus.
On the other hand, the 8 MP wide-angle lens will have a f/2.4 aperture in front of it and it will adopt a 120º field of view. At the last, the 10 MP sensor will have a 2x optical zoom and a f/2.4 lens. That sounds way too perfect, camera lovers must be waiting for this device. Completing the whole setup will unsurprisingly be an LED flash. Some reports came that it will have a 24MP camera lens on the front side like Samsung Galaxy A7 (2018). 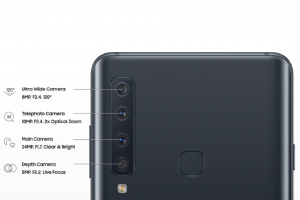 Furthermore, it will run the Snapdragon 660 chipset by Qualcomm. Furthermore, the chipset will be coupled with 6 GB RAM and 128 GB of internal storage. Moreover, the phone will have a microSD slot for up to 512 GB. The Galaxy A9s battery size will be 3,720 mAh with a USB-C port. However,  Samsung will stay on the Quick Charge 2.0 standard. The wait is almost over as only one day is left in its launch. So, grab yourselves to see Samsung’s first ever quad-camera smartphone.