Samsung is a renowned brand and always try to give a new design to its smartphone that make the distinguish among its competitor. This time Samsung Galaxy J1 Ace is launched with elegant design with transparent and elevated corners, which helps to give strong grip in palm. the dimension measure (130.1 x 67.6 x 9.5) mm and display resolution is (480 x 800) pixels with 240 dpi. Samsung Galaxy J1 Ace has 4.3″ Super AMOLED display support 10 point capacitve touch. Samsung is famous for it amazing display and smooth touch, thus Samsung keeps maintain its tradition and launched a smartphone with Super AMOLED display. 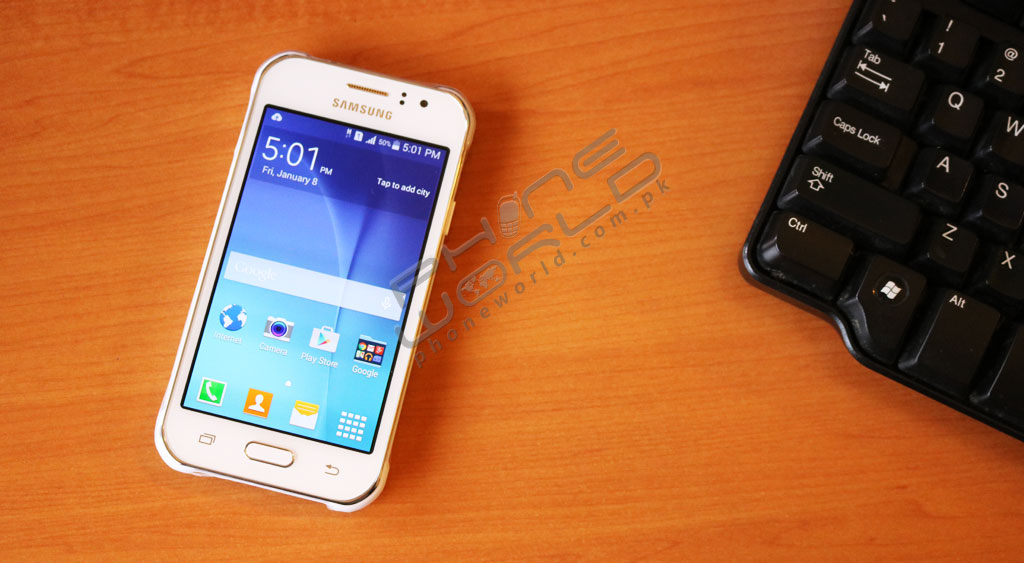 Samsung Galaxy J1 Ace is stuffed with true 5 MP auto focus camera supported with LED and 2 MP front camera for selfies. The cameras give good result but cant be expected more from an entry level smartphone’s cameras. The settings unit has many setting option that you can play with camera to set it for best photography experience. 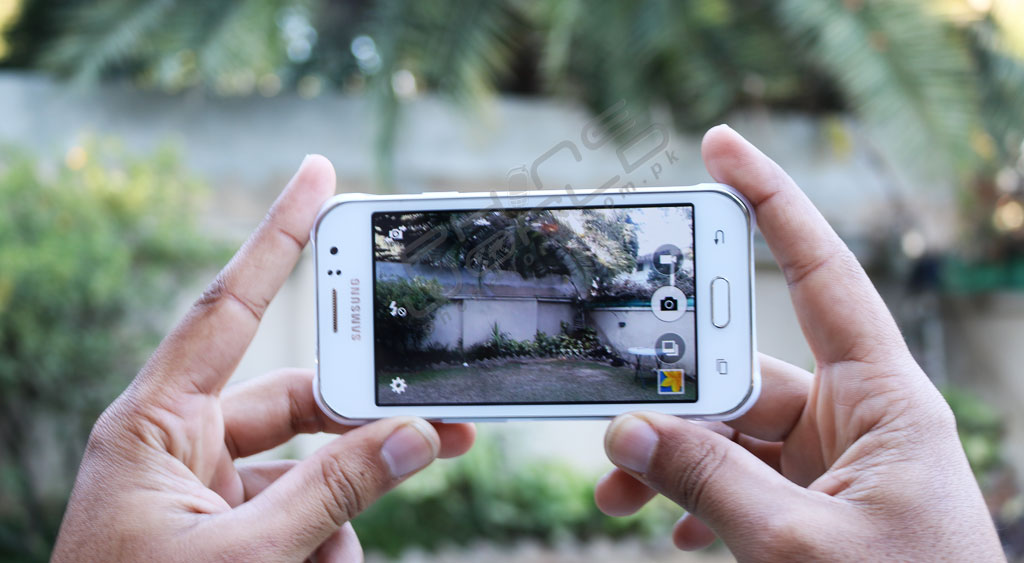 Samsung Galaxy J1 Ace is roll out with 5 MP autofocus camera on back with LED flash for resolving the low light issues. The camera is skilled of making HD videos of 720px resolution. The image captured with Samsung Galaxy rear camera has (2576 x 1932) pixels however the camera setting has an option for adjusting the resolution of  camera according to the choice of user. the camera has good results that one can expect from entry level smartphone.

Lets discuss the the front camera in Samsung galaxy J1 Ace review. Our smartphone is equipped with 2MP front camera that enables you to capture the selfies with friends and family. The front can also make video recording for you. the image resolution measures (1600 x 1200) pixels.

There is 2000mAh remevable battery fixed underneath the back cover. the battery has good performance and long backup time. No doubt, Samsung galaxy j1 Ace has huge standby time and also works fine on 3G calls and browsing.

The external shape of Samsung galaxy J1 Ace is nice and sleek and length of smartphone is less give ease to carry in hands and easily manageable with single hand. The four sides of smartphone are covered with transparent plastic and edges are elevated. Right side has power button while left side equips volume keys, however the top side has audio jack and bottom side has microUSB port and microphone.

Samsung Galaxy J1 Ace has user friendly interface, Android user will be quite familiar with it. As usual the home screen has custom icons of installed apps and home screen is compressed of multiple slides in grid view. There are some snapshot of interface that we have captured to share with you.

Here are the result of Antutu bench marking for Samsung Galaxy J1 Ace. The smartphone scored 14,895 points that is pretty much good scored from entry level smartphone. It also shown the number of capacitive touch; which is amazingly very impressive 10 point multi touch screen, however the stability of processor has also checked and considered to be average stability.

We have also checked the performance of browser, single core and multi core with Vellamo bench mark tool. in browser testing it got 1320 point which is more than enough from entry level smartphone. Further in multi-core and  single core testing it has proved itself to be the best choice for average smartphone user who use low budget smartphones.

In GPU testing of Samsung Galaxy J1 Ace review, The smartphone graphics are handled with Mali-400 MP. The smartphone is able to run all kind apps and games smoothly because it has 46 fps that show it is also a gaming smartphone but unfortunately you will face some issue due to less capacity of RAM. 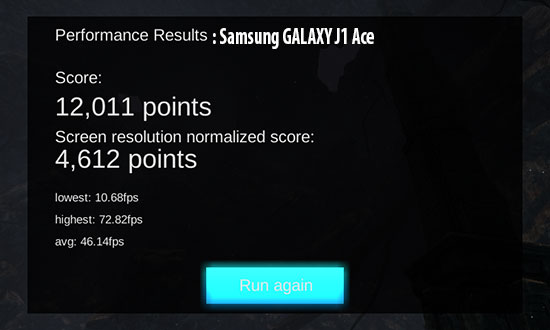 Samsung GALAXY J1 ACE has 1.3 GHz Quad core processor, 512 MB RAM and 8 GB ROM and this is a good combination. The smartphones with the specs mentioned above are always reliable and have better performance in the mid-range smartphones. A smartphone with price of Rs: 13,999 with such great specs and convenient Android KitKat 4.4 is an affordable device at good price.