Samsung revealed the Galaxy J6 and Galaxy J4 back in May. After that, Samsung is all set to launch its two new models called Samsung Galaxy J6 Plus and Galaxy J4 Plus. However, we don’t know the exact launch date of Galaxy J4+ and Galaxy j6+ but the phones are expected to launch very soon. Both have officially been certified by the Bluetooth SIG earlier this month. Recently, a trusty source of early information, the Federal Communications Commission, has unveiled some interesting information about the smartphone. Samsung Galaxy j4+ Fcc Listing shows no hardware home button.

According to Samsung’s request, most of the documents filed to the commission will be kept secret. The company didn’t allow them to unveil those documents. The good part is that there’s still something interesting left for us to see. One of the published documents contains three screenshots. These screenshots are taken from the phone’s menu that reveals more than just the name of the smartphone. Let’s have a look at them. 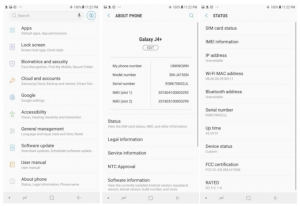 Now if we look carefully at them, what grabs the attention first, are the software buttons on the bottom of the screenshots. This means that the Galaxy J4+ will not feature any hardware navigation buttons. It will not be like its predecessor.

Moreover, it seems that the device is also getting a display with the same aspect ratio as the Galaxy S9 i.e 18.5:9. The smartphone will have thinner bezels and a significantly improved screen-to-body ratio. It will be a budget-friendly phone with good specs.

Furthermore, Galaxy J4+ will support two SIM cards. In addition to that, something interesting can be found under the “Biometrics and security” menu that is the Face Recognition. It is not a common feature on cheaper phones. However, we don’t know its price yet. Considering the price of its predecessor, it is expected to be a mid-range phone.

Also Read: Samsung Galaxy J6 Plus and Galaxy J4 Plus to Launch Soon