Finally, Samsung Galaxy M12 has been unveiled months after its rumours. The new smartphone is the successor of the Samsung Galaxy M11 that was launched in March last year. Samsung Galaxy M-12 key features include quad-rear cameras, a display of water drop type, a fingerprint reader placed on the side, and a battery with 7000mAh. The smartphone also contains the company’s proprietary One UI Core. The Galaxy M12 is also fitted with an all-new metal back with micro-motifs and smooth curved edges to make your hand more comfortable.

Checkout: Samsung Galaxy A51 is Getting Android 11

The dual-SIM (Nano) Samsung Galaxy M12 runs on Android with One UI Core on top and features a 6.5-inch HD+ (720×1,600 pixels) TFT Infinity-V Display with a 20:9 aspect ratio.  There is an octa-core SoC, which is speculated as Exynos 850 SoC, along with 3GB, 4GB, and 6GB RAM options. The phone has a quad rear camera with a 48-megapixel main sensor and a secondary 5-megapixel sensor with an f/2.0 lens with an ultra-wide-angle f/2.2 lens that has a 123-degree field-of-view (FoV).  A macro shooter of 2 megapixels and a 2-megapixel depth sensor used in the camera setup. An 8-megapixel image sensor with an f/2.2 lens is also available on the front. 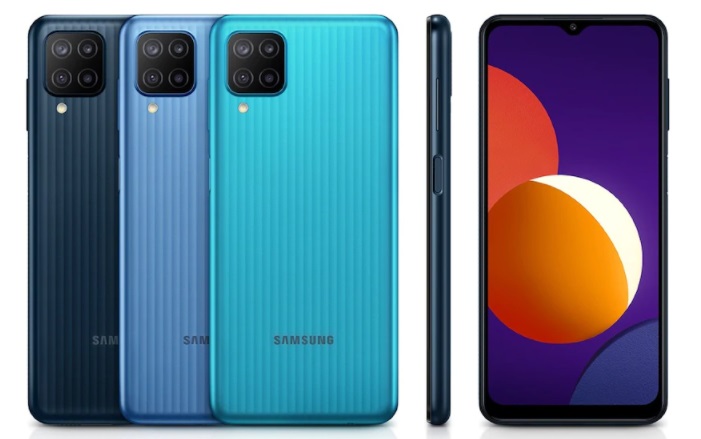 The Samsung Galaxy M-12 comes with an onboard usable capacity of 32GB, 64GB, and 128GB, which can all be extended via a microSD card (up to 1TB) through a dedicated slot. Connectivity options are 4G LTE, Wi-fi, Bluetooth v5.0, GPS/A-GPS, USB Type-C, and 3.5mm headphone jack. Sensors include an accelerometer, ambient light, and a proximity sensor are included on the sensors. The fingerprint sensor is also available on the device.

The expected price of the Samsung Galaxy M12 could be Rs. 29,999/- in Pakistan. Moreover, the phone is available in attractive Black, elegant blue, and trendy emerald green colors. Currently, the phone is listed on the Samsung Vietnam website and its availability in Pakistan is not confirmed.