Samsung is not in the mood to stop launching the M-series handsets. We all know that we had been getting leaks about Galaxy M-series handsets one after the other. Recently, we have come to know that Samsung is all set to launch a new smartphone, Galaxy M40 very soon. In addition to that, Samsung Galaxy M40 also surfaced on the Wi-Fi Alliance Certification Database.

The handset has a model number of SM-M405F/DS which clearly hints that the Galaxy M40 is in the developing stage. As the phone has already been certified by some of the certification websites, so, its launch seems imminent. According to the recent reports, Samsung’s upcoming M series phone may take on Redmi Note 7 Pro and upcoming Realme 3 Pro.

In addition to all this, the WiFi Alliance portal also revealed the same model number of the handset that was SM-M405F. The Wi-Fi certification site revealed that the M40 will run Android 9 Pie straight out of the box. Hopefully, it will come with the one based on Samsung’s own One UI software. 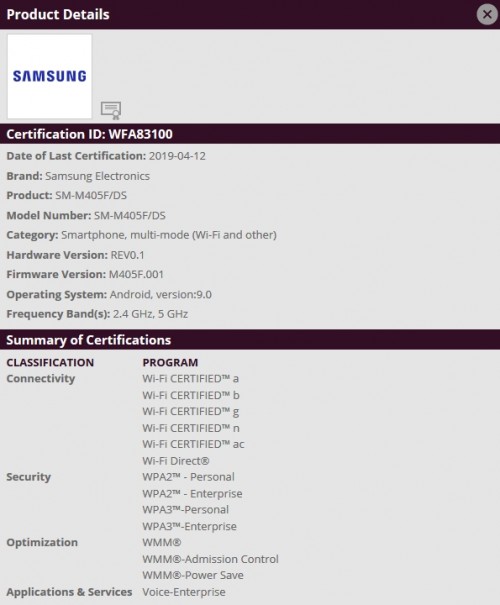 Furthermore, the rumors suggest that the Samsung Galaxy M40 will be quite different from the M30. It will be quite different from the M30 in terms of screen size and battery as well. The Galaxy M30 features a large 6.38-inch Infinity-U display. The display boasts a resolution 2220 x1080 pixels (FHD+).  Furthermore, the new handset features thin side bezels, a small chin, and a waterdrop-like notch. A massive 5000mAh Battery keeps the lights on. Let’s see what Samsung offers in its upcoming new Galaxy M-series handset, M40.