The tech giant, Samsung is not in the mood to stop launching the M-series handsets. Furthermore, we had been getting leaks about Galaxy M-series phones one after the other. Now, Samsung is prepping to release Galaxy M40. The handset surfaced on the Wi-Fi Alliance Certification Database a few weeks back. Recently, Samsung Galaxy M40 appeared on Geekbench revealing the key specs.

The upcoming handset, Galaxy M40 bearing model number SM-M405F appeared on Geekbench recently. According to the listings, the upcoming phone will be powered by Snapdragon 675 SoC. In addition to that, it will boast 6GB RAM. The handset will run Android 9 Pie straight out of the box. The upcoming smartphone made a score of 2,350 and 6,410 points in the benchmark tool’s single and multi-core tests, respectively. Let’s have a look at that. 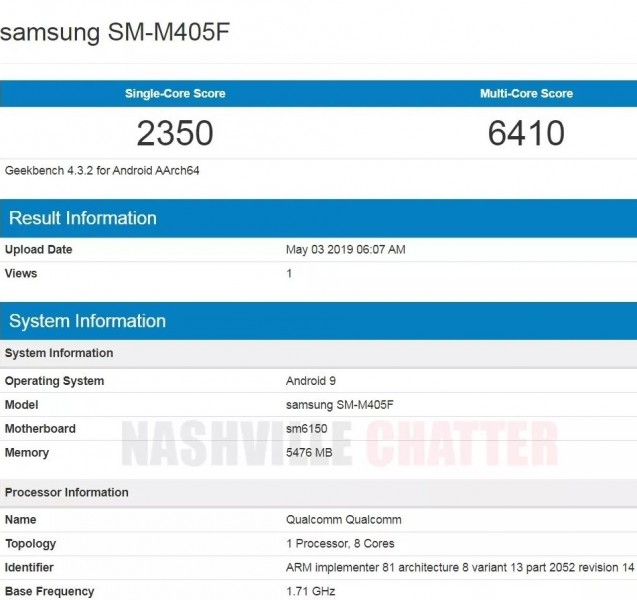 In addition to that, some of the rumors suggest that the Samsung Galaxy M40 will be quite different from its predecessor. The upcoming M-series phone, M40 will flaunt a Super AMOLED Infinity-U display on the front. Moreover, it will come with a triple camera set up at the back. It will be quite different from the Galaxy M30 in terms of screen size and battery as well. If you don’t know the specs of M30 then here they are.

The Galaxy M30 sports a large 6.38-inch Infinity-U display. The display of the handset boasts a resolution 2220 x1080 pixels (FHD+).  Furthermore, the new phone features thin side bezels, a small chin, and a waterdrop-like notch. A massive 5000mAh Battery cell keeps the lights on. The information about the upcoming handset is quite scarce right now. Let’s see what Samsung offers in its upcoming Galaxy M-series handset, M40. Till then, stay tuned for updates.