The Samsung Galaxy M52 5G is the South Korean company’s newest entrance into the competitive mid-range category occupied by Chinese competitors. To compete with the best of OnePlus, Realme, and Xiaomi, the Korean tech behemoth has nearly narrowed the specification gap. The Galaxy M52 5G is advertised as a ‘Monster’ handset, having a 5,000 mAh battery and a 64MP primary camera. It also has an OLED display with a refresh rate of 120Hz, which is generally reserved for high-end devices.

Yesterday, the Samsung Galaxy M52 was released in Pakistan. The newest Galaxy M-series phone was released quietly, with only a few social media posts revealing its presence. The phone has a mid-range 5G processor, a soft-touch display, and a respectable camera system, but nothing out of the ordinary for the price. The Qualcomm Snapdragon 778G is the key to driving the Samsung Galaxy M52 5G. It features a 6nm node and four high-performance 2.4GHz cores.

Also Read: Twitter Upgraded its iOS App after Being Affected by a Strange Glitch that Log out Users 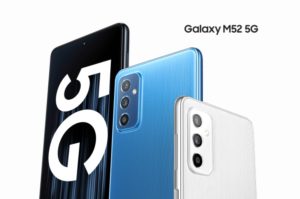 The inbuilt storage of 128GB is extensible up to a terabyte. Furthermore, Samsung has added 4GB of additional virtual RAM to maintain constant efficiency. With 6GB of RAM, the Galaxy M52 5G can easily handle multitasking and intense gaming. The Game Accelerator function balances temperature, memory, and battery efficiently. The realistic experience is further enhanced by Dolby Atmos stereo support.

This smartphone is powered by a large 5000 mAh battery and supports 25W Fast Charging.

The Samsung M52 5G is powered by OneUI, which is based on Android 11.

The Galaxy M52 is also slimmer and lightest than ever before, which is seen in the latest 5G Samsung smartphones. With 7.4mm dimensions and 173g weight, this Galaxy is possibly the lightest Samsung device available right now. Its body has a textured surface in white, black, and brilliant blue. For further protection, Samsung has combined the fingerprint sensor with the power button. 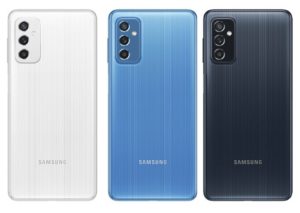 It features a 6.7″ Infinity-O SuperAMOLED touchscreen that updates at a snappy 120Hz and has a resolution of 1080 PPi. The tiny, nearly even bezel gives it a sophisticated appearance. A 32MP front camera is also integrated into the M52 display.

The camera cluster on the rear consists of three lenses and an LED flash. It has a 64MP f/1.8 wide camera, a 5MP macro camera, and a 12MP ultrawide camera. However, no sophisticated telephoto zooming or stabilization is provided.

You may also be interested in: Winamp Music Player; A Living Legend, is Getting Ready for a Relaunch