Samsung Galaxy M52 5G coming as the sequel of Samsung Galaxy M51, which launched last year with the biggest phone battery. Galaxy M52 is not officially unveiled yet. However, this latest M-series model was already leaked and confirmed to debut. 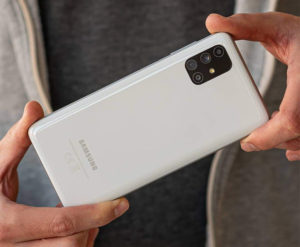 The quad-camera setup has a 64 MP main sensor, a 12MP ultrawide unit, and a 5MP dedicated macro shooter. The fourth portrait camera completes this setup, which is probably 5 MP as well. The Galaxy M52 will come with a 32MP selfie camera, reportedly will be fitted within a hole-punch cutout.

The Galaxy M52 will be the first Samsung phone to make a debut with the Snapdragon 778G, overall it would be a good addition to the Samsung M-series with this price tag.  This will have a 5G chip built on a 6nm wafer, introduced by Qualcomm in May this year. The Samsung Galaxy M52 pairs this with 6GB RAM and the most recent Android11-based OneUI Core. The OLED display will feature a 1080P resolution.

The Galaxy M52 is expected to have a huge battery of 7,000 mAh with fast charging support of 25W like its successor Galaxy M51. Furthermore, we have to wait for its launch date and exact price.

You may be also interested in: TikTok Releases Quarterly transparency report- Removed 6.5 mn videos in Pakistan