The most awaited flagship device of Samsung, Note 9, is reportedly under development. We have already seen many rumors about the specs of the phone. Now the latest rumors revealed Samsung Galaxy Note 9 Color variants. According to the rumors, Note 9 will come in 5 color options. Let’s see in which colors we will see the Note 9.

One variant will come in Midnight Black color alongside a slightly lighter Lilac Purple called Lavender. Additionally, a darker Titanium Gray model is set to be released next to an unnamed electric blue Galaxy Note 9. Also, completing the lineup will be a new brown color.

Among these colors, Samsung has confirmed gray and purple colors. However, the Korean company has not confirmed about any other color option. 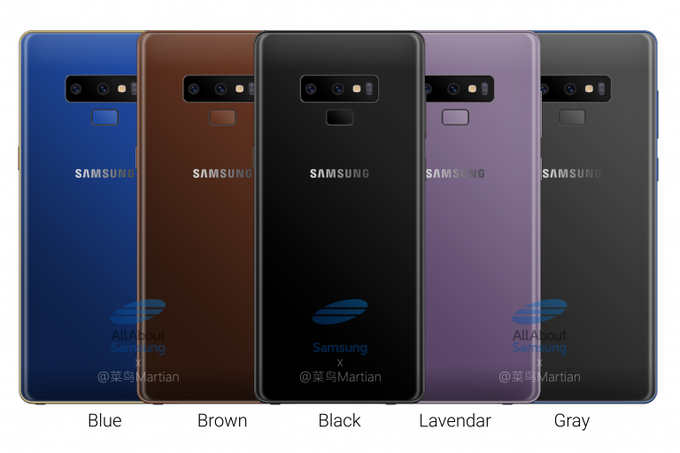 Furthermore, Note 9 will come with a dual-edge 6.4-inch display. It will have Qualcomm’s Snapdragon 845 for US variant. Whereas, the international model will replace this with Samsung’s own Exynos 9810 Octa. Moreover, the phone will come with 6 GB of RAM. However, the phone will come in three memory variants including 64GB, 128GB, or 256GB of internal storage. The users can also expand the memory via microSD.

It is still unclear when Samsung will launch this smartphone. However, the rumors suggest that the phone will launch in July.