The new Galaxy Note 9 images are published by Android Headlines which revealed the brown Note 9 along with various accessories i.e;  a pair of Gear IconX earbuds, a wireless charging stand, and a Gear S3 smartwatch. 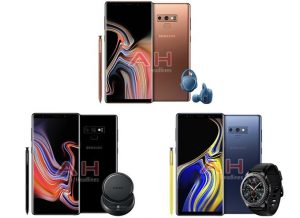 The render shows a typical Samsung black retail box with the phone name. On the front of the box, the Wireless Charger Duo looks like Samsung’s current wireless charging stand but there is also an added side piece.

In addition, the packaging details that the secondary Qi charging pad could be used to charge a second phone and Samsung watch. The highlighted specs are listed on the back of the box the screen size, the dual 12MP camera, the wireless charging abilities, the IP68 waterproofing.