Samsung is getting close to announce a new flagship Galaxy Note 9. We are still a week away from the announcement event but we know almost all about the Note 9 via leaked details and images. The newest Pre-order poster has recently revealed Samsung Galaxy Note 9 prices for two variants in Indonesia. 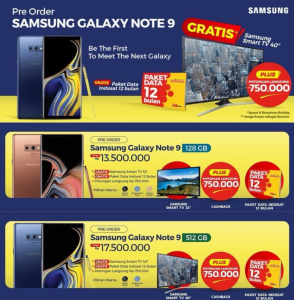 From poster it seems that in Indonesia, both the 128 GB and 512 GB versions of the Galaxy Note 9 will come with free Samsung TVs as pre-order gifts.

The Samsung Galaxy Note 9 will appear in three colors at the Asia-Pacific market – Black, Blue, and Copper, but the 512 GB variant will not be available in the Brownish option. According to GSMA, For everyone pre-ordering the device between August 1 and August 9, there are plenty of freebies like a Samsung Smart TV, up to IDR750,000 cashback and free 12-month data plan.