According to Geekbench database, performance for Samsung Exynos 9810-based Note 9 is significantly better.  Exynos 9810, an octa-core ARM will be deployed to the international version of Galaxy Note 9. According to the entry, the Exynos 9810 offered a single-core score of 2737, and a multi-core score of 9064. If these numbers are accurate, Samsung Galaxy Note 9 will be the fastest Android devices in the market. 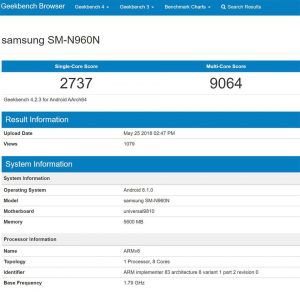 The other big and crucial news is that Samsung plans to upgrade the note 9 Front camera. Samsung lovers will be happy to hear this news as in this technological world of selfies, front camera with high pixels is an add-on to the device. Tech Savys are investing more and more on smartphones having better camera results.

Moreover, Samsung Galaxy Note 9 will have microSD Slot, which means this could be the first mass-market 1TB-capable handset. This time Samsung lovers will enjoy the huge storage and will be able to download heavy videos.