Samsung Galaxy Note 9 is the most awaited flagship device of Samsung. We have already heard many rumors about the phone. Some of them revealed the specs while some other unveiled the colors of this upcoming phablet. Recently, the National Telecommunications Agency in Brazil has confirmed the Samsung Galaxy Note 9’s 4000mAh battery in a leaked document.

Note 9 will come with a dual-edge 6.4-inch display. It will have Qualcomm’s Snapdragon 845 for US variant. Whereas, the international model will replace this with Samsung’s own Exynos 9810 Octa. Moreover, the phone will come with 6 GB of RAM in three memory variants including 64GB, 128GB, or 256GB of internal storage. The new S Pen of Galaxy Note 9 will allow you to control smart home appliances. It can also act as a remote shutter key for the camera.

The certification document by ANATEL doesn’t reveal much about the phone but it has confirmed one of the main features of the Galaxy Note 9 that the upcoming phablet will boast over its predecessor having the massive 4,000 mAh battery. Rumors about the large battery capacity have been going around since April. In June, there were different sources who revealed this feature but there were no official documents to confirm it. Now Brazils’s National Telecom Agency, ANATEL has solidified the claim that Samsung Note 9 will feature a 4000mAh battery. The official document has been circulated on media. Let’s have a look at that. 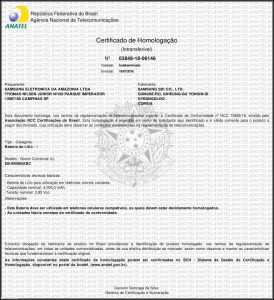 The certification only confirms the battery feature. No words have been seen for any other specs of the upcoming phablet. We hope that the big battery will come with some competing charging tech. We already know that the wireless charger will also be introduced alongside this awaited flagship phone. Let’s see when will the agency confirm the other specs of the phone.