The smartphone brands and chip makers have focused heavily on new artificial intelligence implementations in the past few months. We all know about Huawei’s Kirin 980 which boasts two dedicated Neural processing units in the hope of improving AI performance. Samsung has largely avoided such implementations. However, with the arrival of the Galaxy S10, this could change. Recently, we came to know that the company is planning to include a dedicated AI unit in the Samsung Galaxy S10 Processor.

Through the LinkedIn profile of a former Samsung employee, we came to know that the company began developing its second-generation NPU design in December of 2017. The new design is expected to presumably be ready in time for the arrival of the Galaxy S10. 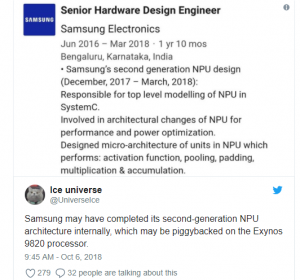 We can expect the chip to likely make its debut in the Exynos 9820 chipset and, consequently, the Galaxy S10 series. It’s quite a surprising move on Samsung’s end. According to the former Samsung Employee, it will handle all the current Vision Processing Unit (VPU) chip’s tasks as well. The AI Unit will have the new, optimized and more multifunctional hardware. Furthermore, it will be responsible for top-level modeling in SystemC.  It will help in the architectural change of Neural processing unit for performance and power optimization.
The designed micro-architectural units will perform functions like pooling, padding, accumulation, and multiplication. It seems that the company is putting a lot of work into the AI processing to handle the workloads. Not only Samsung, but both Huawei and Apple also seem to currently be battling it out in this space. It is quite clear that the race is still wide open. AI is only going to get bigger and more important in tech and mobile devices in the near future.