Being the successor, Samsung Galaxy S7 Edge inherited many features from Galaxy S6 Edge but has also come up with unique hallmarks that will force you to buy it. The design of Samsung Galaxy S7 Edge is improved and weight is reduced as it is lighter than Samsung Galaxy S6 Edge. You don’t need to be confuse while reading about the camera of S7 Edge as it is reduced to 12MP from 16MP but interestingly Samsung introduces “Dual Pixel Technology” in its newest image sensor which will help you to capture more clear pictures.

Samsung Galaxy S7 Edge comes in Black, White, Silver and Platinum Gold colors and I got hands on beautiful Platinum Gold color wrapped in a black color box. The device comes with all essential accessories like  fast charger (Adaptive Fast Charger), headphones, data cable, a SIM ejection pin for which we usually use a toothpick or  hair pin and an USB-OTG Connector. A part from basic accessories, the box also carries the usual user guide book which no one of us likes to read.

Price and Specifications of Samsung Galaxy S7 Edge in Pakistan:

The Super AMOLED screen is more bigger now of 5.5″ with ~76.1% screen-to-body ratio; while the dual-edge design of display gives the sense of compact smartphone to the user. The display of S7 edge has ~534 ppi pixel density. The curve shape has been preserved in this smartphone as well. The nice thing is 2mm thinner bezels as compared to S6 edge. The enhanced Quad HD 1440 x 2560 pixels resolution was something necessary for an extraordinary experience on the Oculus-powered Gear VR headset. The increased pixel resolution will also entertain user with better experience while playing games, watching videos etc.

The device has same maximum screen brightness like its predecessor whereas if the auto brightness mode is ON then user will experience a bit brighter screen up to 610nits in the sunlight. The display brightness is 1.8nits; which is suitable for night use of mobile. 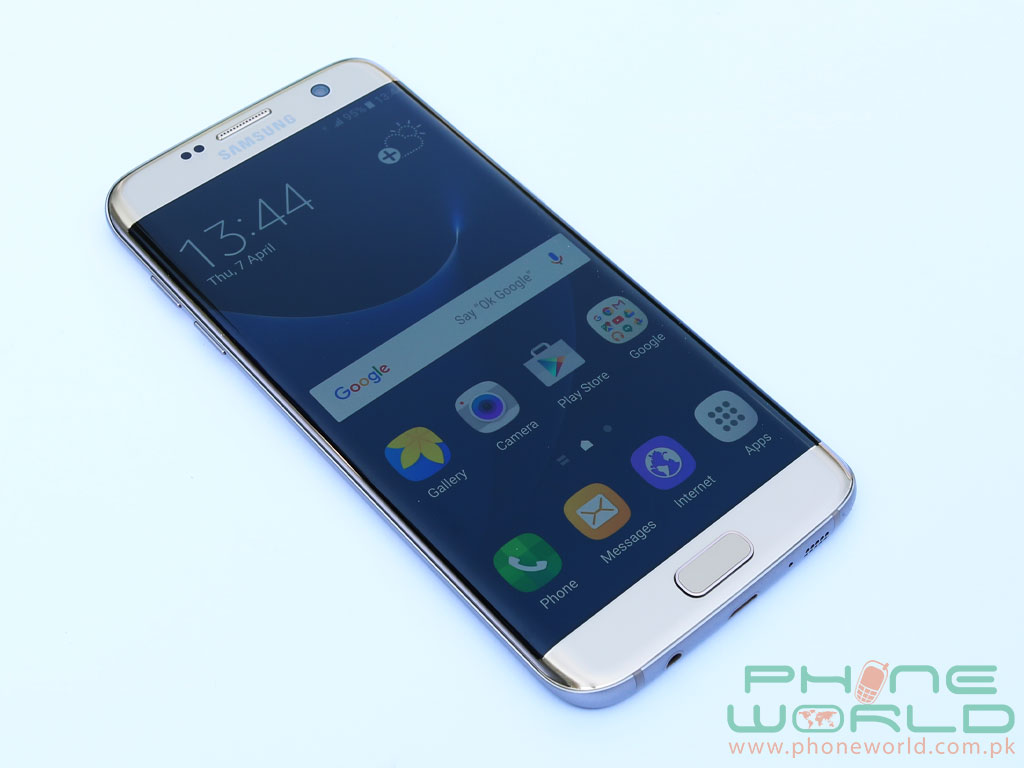 The always-on display feature of Samsung S7 Edge is the latest addition in to this smartphone. Now there is no need to wake up your smartphone for just checking the latest activity on your phone as the display will always be on for you and will show date and time, calendar etc. The display is smart enough to automatically disable when you put your Galaxy S7 edge in bag or pocket.

Above all, the display protection is most fundamental need of every user. Thanks to Gorilla® Glass 4 that safeguards your trendy gadget.

The beautiful design of Samsung S7 edge has unique looks that will easily attract you. Let’s start review from the bottom of phone, S7 edge has a USB port, water-resistant headphone jack, a speaker and a primary mic at the bottom. On the left side there are two volume control buttons and the right side holds the power button along with SIM/Memory Card Tray. On the back of S7 edge body, there is heart rate sensor and also the LED flash very close to the 12MP camera ( inside embossed camera)which is also the undercover fingerprint magnet. The back cover is also protected by Gorilla Glass so don’t worry if you accidentally drop your smartphone.

The beautiful front of S7 edge is designed with curved edges display and a home button and two touch buttons at the bottom for back and app switching function.

The home button also acts as a fingerprint scanner. On the top, there are proximity and light sensors. The front 5MP camera for selfie lies on the right side.

All these specs are beautifully packed in a 5.5″ display that will double the use of this classy gadget.

Samsung S7 edge is powered by a powerful Exynos 8890 chipset. Exynos 8890 chipset is the first of its type powered with a newly introduced high performance CPU cores “Mangoose”. The eight-core processor of the Exynos 8890 is comprised of four Mongoose cores ticked at 2.6 GHz and the rest of four cores Cortex-A53 running at 1.59 GHz. This powerful CPU setup “Quad-core 2.3 GHz Mongoose”work together in order to give the user a smooth experience while multi-tasking.

The GPU in  Exynos 8890 is the powerful ARM Mali presently in the market. Whatever version of S7 Edge you buy, you will enjoy 4GB of LPDDR4 RAM in which half of a gig is available for the GPU, while the rest of 3.5GB will be handled by the Operating System (OS). The powerful processor of Samsung S7 edge is controlled by Android OS, v6.0 (Marshmallow) for smooth multi-tasking.

Samsung S7 edge comes with 4GB RAM and 32/64GB internal storage. 4 GB RAM will let the user work fluently on smartphones just like working on a mini laptop. The 4GB RAM also let you run several apps on S7 Edge without any lag.

One of the restored feature in S7 edge is inclusion of microSD card support that let you expand the memory upto 200 GB.

The real value of a camera must not be judged by its megapixels, there is much more that can evaluate the performance of a camera. As Samsung has made a drop in the megapixel of its flagship 2016 smartphones but also introduced a new technology of dual-pixel in the camera. The S7 edge camera is now embossed inside the body of S7 edge; which was previously a disappointing factor for Samsung lovers so improvement has been made. 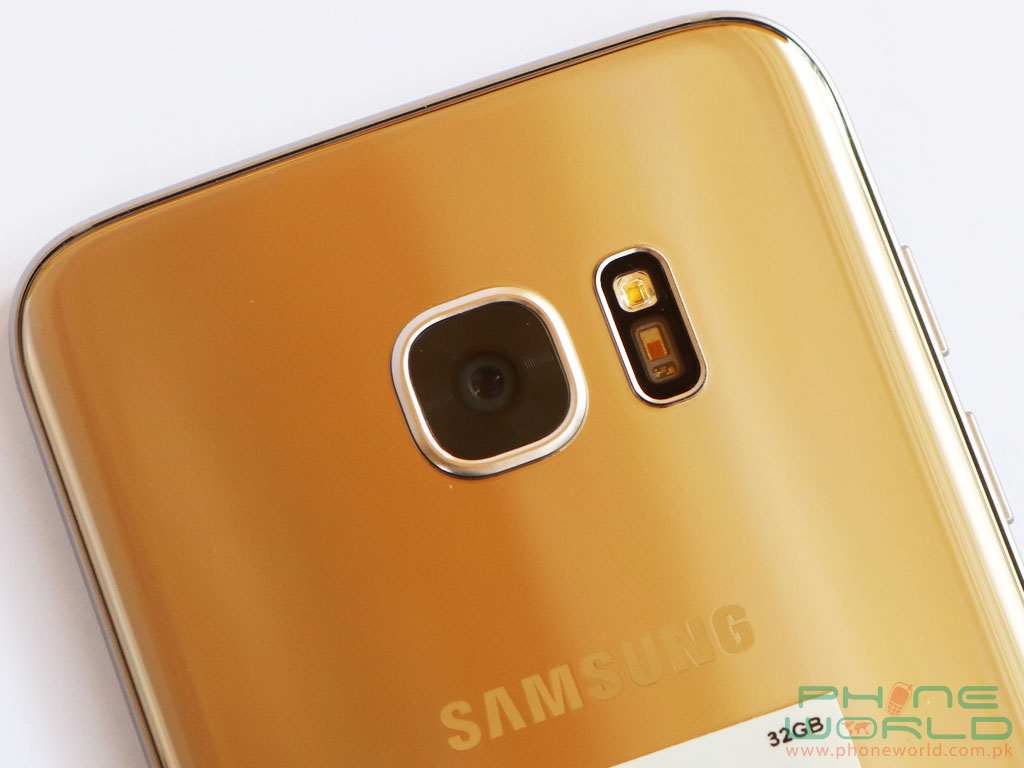 Samsung Galaxy S7 edge has a 12-megapixel primary camera having  f/1.7 aperture lens. The dual-pixel technology helps this camera to quickly auto-focus and also in capturing a decent image for you. The camera resolution is (4032 x 3024) pixels with native ratio of 4:3 and it also records [email protected] pixels video.

A part from this, the camera of S7 Edge allows the you control the aperture, ISO, shutter speed, white balance and focusing points yourself just like a DSLR. In short, it gives you complete manual experience.

The 5 MP camera of Galaxy S7 edge is more clear and captures bright selfie. The camera resolution of front cam is (2592 x 1944) pixels with native ratio of 4:3. There is no front flash in the cam but still you can capture a brighter selfie as the screen of S7 Edge will act like a flash for you.

Samsung Galaxy S7 Edge is of course 4G enabled that ensureS user’s 100% connectivity along with Bluetooth, WiFi and OTG options. Following are the connectivity features in S7 edge:

The extremely small battery of Samsung S6 Edge 2600 mAh was actually a disaster done by the brand as many people were disappointed by it’s performance. This loss was somehow accommodated by introducing the sleek design for S6. But now the battery for S7 edge has been updated upto 1000 mAh as it carries 3600 mAh battery. The 38% bigger battery gives the user significantly better battery life. Further, the fast charging makes use more happy as the battery charges quickly.

Samsung S7 edge has successfully scored 100029 points while topping the list among other smartphones in Antutu compassion; which shows that S7 edge is presently the best smartphone released in 2016 flagship. The display supports 10 point multi touch which enables the smartphone to play games more perfectly.

Interestingly, Samsung S7 edge has also topped in Vellamo Benchmarking. It attained 3335 points in multi core test which shows that the communication among the cores of processor is highly optimized and fast. In Metal, the single core performance is also extraordinary while getting 3001 points. The 4855 points of Browser Test clearly indicates that the browser of S7 edge is highly responsive and its loading speed is very high.

Samsung never disappoints its users and always target new innovations and creative ideas while launching its flagships. Samsung S7 Edge is yet another milestone by the worlds’ second smartphone brand.

Some great improvements made by Samsung in Galaxy S7 include the  inclusion of microSD card, water-resistance and also increased battery side without increasing the side of body. Literally, this trendy smartphone S7 edge is going to force you to “Re-think What A Phone Can Do”. So if your pocket let you allow to buy this innovative yet expensive masterpiece then go for it and experience the world through Samsung Galaxy S7 Egde.