There had been a lot of updates swirling regarding Samsung’s New Foldable Phone, the Galaxy Z Fold4 since the last two months. The all-new foldable phone is expected to come with promising features. The Samsung Foldable Phone is expected to make its way to the market on Aug 10. Recently, the phone appeared on Geekbench with its key features boasting Snapdragon 8+ Gen 1 Chip.

The Galaxy Z Fold4 recently got benchmarked with model designation SM-F936U. According to the latest reports, this seems to be the US version. The upcoming Galaxy Phone will run Android 12. In addition to that, it will come with the Snapdragon 8+ Gen 1 chip with 12GB RAM. It may be the only RAM option because mobile companies are now eliminating the16GB RAM variant. 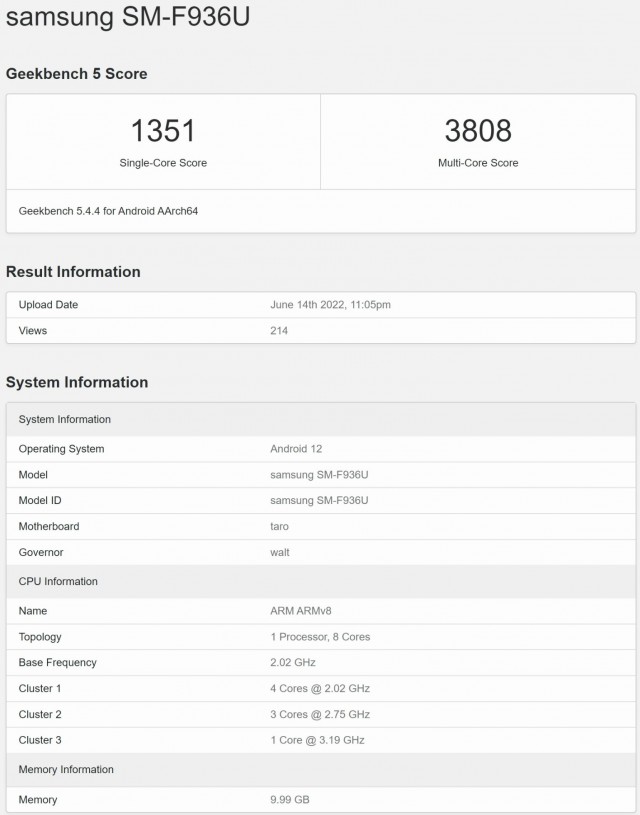 In addition to that, the phone is expected to come with the same RAM amount. However, the company may increase the maximum storage from 512GB on Fold3 to 1TB on the Fold4. A month back, it was revealed that the Fold4 will come with a 4,400 mAh battery. The battery capacity is also the same as the GalaxyFold3. The handset will have a smoother look as compared to its predecessor. It will have a less prominent crease that will give the foldable phone a very neat and decent look. It will have a thinner design and improved camera hardware without compromising the battery capacity. This surely seems to be a promising feature.

Some features of the new phone seem the same as Fold3 however, some of them are new. Stay tuned for more updates regarding the phone. Samsung’s much-anticipated phone will release on Aug 10. Let’s see what Samsung offers in its flagship phone.