Samsung announced today the release of “Samsung Wallet,” which would allow users to save digital keys, boarding passes, identification cards, and other items in a single place. According to the company, Samsung Wallet merges Samsung Pay and Samsung Pass into a single safe platform. The mobile wallet was initially teased earlier this year at the company’s Unpacked event.

Galaxy customers in the United States, France, Germany, the United Kingdom, Italy, and Spain will access the Samsung Pay or Samsung Pass applications to migrate to the new Samsung Wallet on their compatible Samsung Pay-enabled Galaxy phones running Android 9 Pie or later from today.

Users will get instant access to their payment cards, loyalty, and membership cards, and more with this Wallet. It also interacts with Samsung Blockchain Wallet, allowing users to track the value of their digital assets by monitoring the value of cryptocurrencies. According to the business, Samsung also contains Samsung Pass capability, which securely saves passwords and authenticates users’ identities using biometric data to log into applications and services. 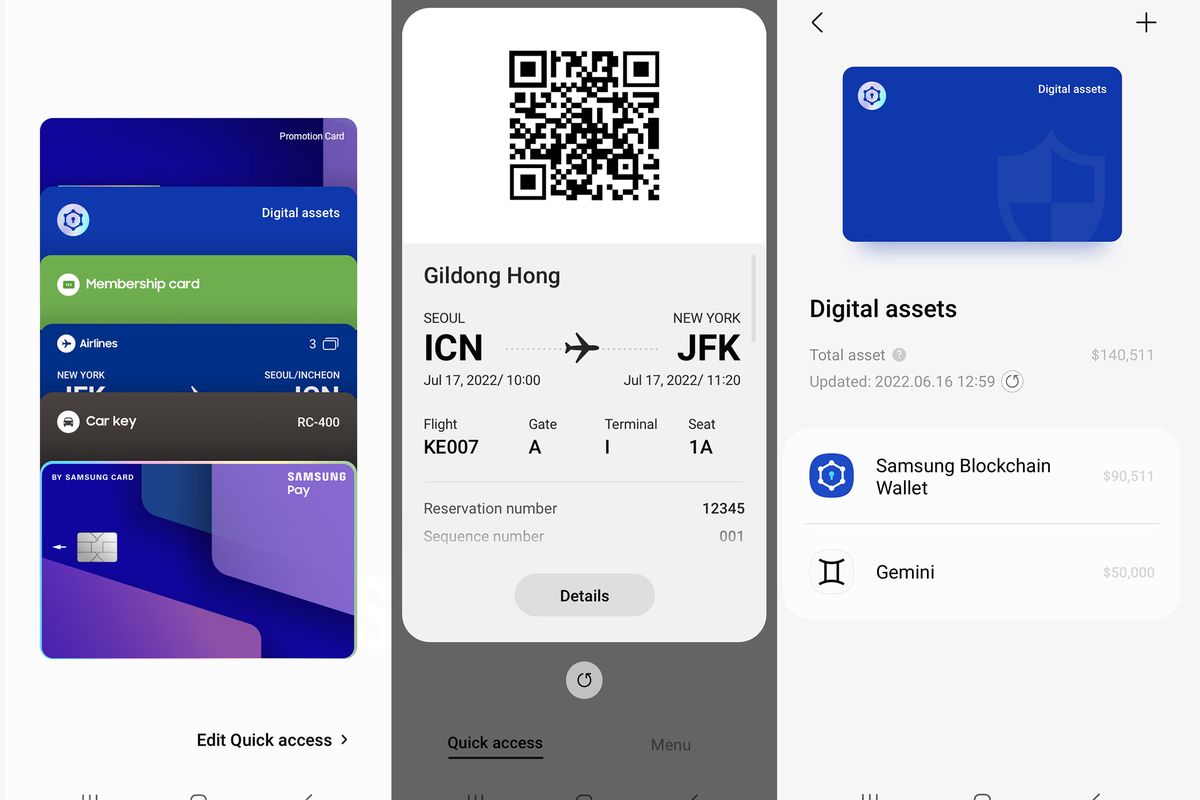 The mobile wallet may also be used to hold critical paperwork, such as evidence of COVID-19 vaccination. Later this year, Wallet will begin to accept legitimate IDs such as mobile driver’s licenses and student IDs from chosen institutions.

This Wallet also works with SmartThings to enable digital car keys for certain BMW, Genesis, and Hyundai models. Users will be able to lock and unlock their cars, start engines, and do other things directly from their mobile wallet thanks to the connection. The feature is available for a variety of models. Users may also save their boarding cards in their Wallet, beginning with certain Korean Air flights, according to Samsung. When consumers will be able to upload boarding cards from other airlines is unknown.

Samsung Wallet is secured by Samsung Knox, according to the firm. To secure users’ sensitive data, safeguards such as fingerprint recognition and encryption are used. To further defend against digital and physical hacking, Samsung emphasizes that some important vital components in the Wallet are held in an isolated environment termed the embedded “Secure Element.”

“With a truly safe and secure environment for storing digital keys, cards, and more, Samsung Wallet is bringing a new level of everyday ease to mobile devices,” said Jeanie Han, executive vice president and head of digital life at Samsung Electronics, in a statement. “As part of our continuous commitment to open ecosystems, we will continue to enhance the capabilities of Samsung Wallet by collaborating closely with trusted partners and developers.”