The foldable smartphones by Samsung are coming alive again. The company is famous for its good quality phones at affordable prices. It launches various foldable smartphones over the years. Galaxy Z Flip series is in the same category. Yet again, it is ready to make such a phone. We are happy to tell you that Galaxy Z Flip4 is coming! The news is confirmed because Samsung is shipping 60% more panels for the phone. It will be the successor of Galaxy Z Flip3. That was launched in the previous year. People showed mixed responses over its launch as some people prefer folding phones while others don’t. the best thing about a foldable phone is that you can fold it to make it pocket-sized. And you can carry it easily with you safe inside your pocket.

Ross Young, CEO of Display Supply Chain Consultants, writes the report (DSCC). According to a source shared on Twitter, Samsung expects to get a substantially larger initial batch of display panels for the Galaxy Z Flip3’s replacement. Samsung Display aims to start exporting these touchscreens as early as April, with a shipment volume roughly 60 percent more (8.7 million) than the Galaxy Z Flip3. Its shipment was (5.1 million) back in the year 2021. 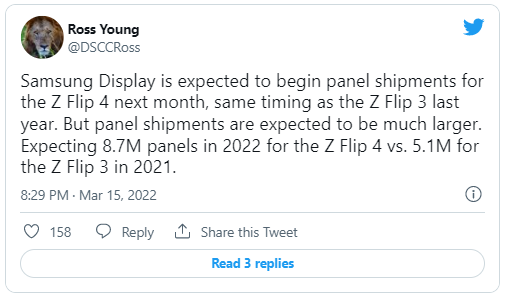 Samsung could expect to produce even more folding phones this year. That is confirming claims from November that the company planned to increase manufacturing of both the Z Flip4 as well as Z Fold4. The company, on the other hand, would prioritize the manufacture of the Z Flip4 above the Fold, owing to its scalability and more affordable price point. Samsung Z Flip3 5G has an initial price of $999, which is much less than the $1,380 of the previous Z Flip3.

The Popularity of Z Foldables is Increasing

With each passing year, the popularity of Z foldables is increasing. It is because their features and quality is improving with each launch. They have water-resistant properties as well, which make them reliable phones to use.

Also Read: Twitter is functioning to get rid of video upload issues in Android 9 pie