Samsung has a bad habit of  “accidentally” leaking the images of their upcoming devices. Just like always, Samsung has Accidentally leaked Official Image of Galaxy Note 9, keeping their tradition alive.

Samsung has opened up reservations for Galaxy Note 9 on its website ahead of the actual launch. However, the phone is still to be announced yet. Making us to able to reserve the latest Galaxy smartphone, this week, Samsung launched a new page on its website and customers can get a special offer in the process. So if you are planning to buy the Note 9 anyway, then reserve your’s one now.

Here is the Official Image of Galaxy Note 9

As Samsung has the routine of leaking its own products and this time the tech giant has gone out of the way. The Preorder page was a part of the newsletter that the company has sent to its customers in New Zealand. However, when you click on the preorder button, it gives an error page as Note 9 preorders are likely still a few weeks away.

Here is the  Official Image of Galaxy Note 9 Leaked by Company: 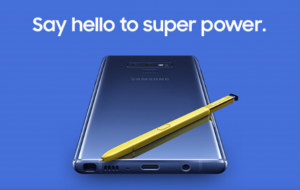 The image of Galaxy Note 9 above shows that it is just like Note 8 with a headphone jack, a USB-C port, dual rear cameras, and a rear fingerprint sensor. We can see the rear of the phone, pictured in blue, alongside a yellow stylus.

A few days back Samsung had accidentally leaked Galaxy Watch on its website. Samsung is not the only company who opt for this “accidental leak” to market their device before launch, Apple once has also announced the iPhone 7 on Twitter “accidentally”.