We have already reported you earlier that Samsung is Testing its First Android Go Phone. A report from SamMobile claims that the company is testing different versions of a phone with the model number SM-J260 in a number of different countries in Europe, Latin America, and Asia. Samsung Leaks Reveal Android Go Phone.

The first Android Go phone Specs has been revealed by a source that it has 1GB RAM. The phone comes with Android 8.1 Oreo, and a quad-core processor. And now, a new leak has gave us an another update, which reveals a few more key details of the handset. 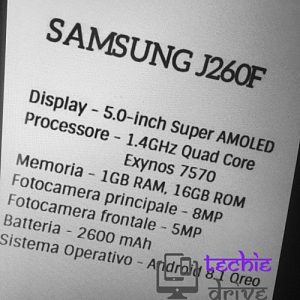 From the above leaked image, we can see that the Samsung Android Go phone will be powered by the Exynos 7570 SoC, and it will come with a 5-inch display. Other than that this upcoming device storage is 16GB and the camera section will pack 8MP at the back and 5MP at the front. The power house of Android Go Phone carries 2,600mAh battery  to keep the lights on.

Earlier in this year, a benchmark listing for an entry-level Samsung phone suggested the company could be working on an Android Go smartphone. After that some reports have revealed more about the phone’s (SM-J260x) market availability.