Abdul Razak Dawood, advisor to the PM on Commerce, clarified the circulating rumors that Samsung will not make phones in Pakistan to be wrong. These rumors have gotten all the hype in the recent days and certain news have been going around in the media regarding the Samsung’s imminent arrival and starting their step-up in Pakistan’s local manufacturing space.

Abdul Razak Dawood @razak_dawood
A statement has appeared in a section of media, wherein I have been misquoted regarding setting up of mobile phone manufacturing unit by Samsung in Pakistan. I wish to clarify that I had stated that Samsung has changed its earlier decision & now has agreed to come to Pakistan

The Commerce Advisor Abdul Razak through his Twitter account stated in a short statement. Dawood in a clear and conclusively turn down all the rumors and reports which stated that Pakistan has failed in pursuing the Korean mobile manufacturing giant, to establish a manufacturing and assembly plant in the country. 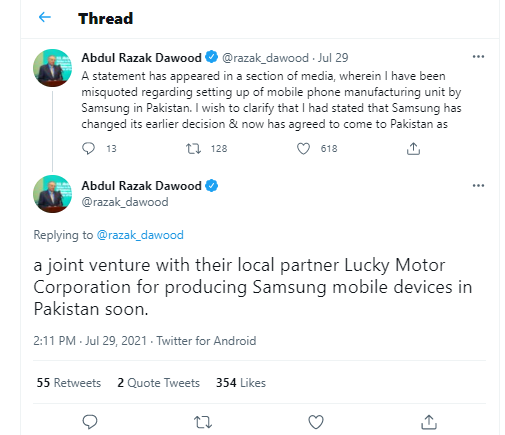 Advisor on Commerce Razzaq Dawood clearly said that Korean mobile manufacturer has changed its earlier decision and now they have agreed to come to Pakistan as a joint venture with their local partner Lucky Motor Corporation for producing Samsung mobile devices in Pakistan soon.

In pursuance of the underlined clarification, the Joint Venture of Samsung and Lucky Motor Corporation (LMC) will continue to seek relevant regulatory approvals to establish an official business structure.

The existing plant facilities of LMC that produces vehicles at the Bin Qasim Industrial Park, Special Economic Zone, Port Qasim, Karachi will be providing the production facility for the Samsung Mobile Devices.