Last year Samsung has launched Flip Phone W2018 with Widest Aperture Camera. It was a high-end phone with many interesting specs. Now, the company is working on its successor which is W2019. Samsung New Android Flipper W2019 Appeared on TENAA.

TENAA listing has not revealed any of the specs of the phone. However, It revealed the pictures of the phone. The photos revealed that W2019 will have almost the same design as of last year’s 2018. It is a combination of metal and glass and may also come colors – Elegant Gold and Platinum. Moreover,  W2019 may sport a pair of 4.2-inch AMOLED touchscreen displays, each with a 1080 x 1920 resolution. The phone also features a full keypad and navigational buttons. 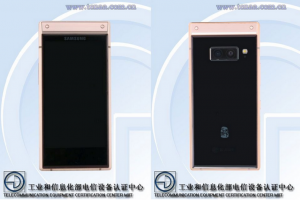 Most probably, Samsung New Android Flipper W2019 will be powered by Qualcomm’s Snapdragon 845 chipset. Moreover, the device may come with 6 GB of RAM and 64 GB of storage. Just like its predecessor, the phone will surely come with a dual-sim slot, a 2,300 mAh battery. The previous model came with a rear-mounted fingerprint scanner and we expect it in the new model too. Moreover, the Samsung New Android Flipper W2019 may also come with Samsung’s Bixby assistant.

For photography lovers, the phone may come with a rear 12 MP camera with a wide aperture. Moreover, the phone will come with Android Oreo (8.0) OS. All these are rumors, we are not sure about the specs of the phone. But we will update you when we will get more information about it.