Samsung’s Galaxy S10 series will appear in Q1 2019 with the bezel-less design concept that will reduce both the top and bottom bezels to a minimum. However, Now Samsung has filed patents of front panel. Samsung new patents reveal a new front panel design that makes use of small cut-outs on the side.

Advertisement
Samsung wants to reduce smartphone frames that’s why Samsung appears to visualize future devices which make use of displays that wrap over the edge completely and leave a fraction of frame visible. However, there will be no room for physical buttons, as we can see in image of  Samsung patent. 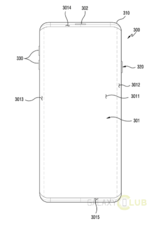 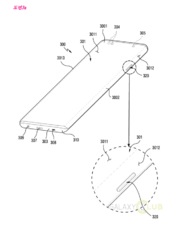 The South Korean smartphone manufacturer may utilize cut-outs within the edge portions of the display rather than implementing on-screen software buttons. This would allow the Samsung to maintain any hardware buttons that would have previously sat on the frame such as the power key, volume rocker, and the dedicated Bixby button. In addition, it would still allow company to make edge-to-edge design up front.
However, it is not confirmed yet that Samsung will actually make use of its latest patents on a future smartphone. We can only wait and see. Samsung always do new experiment and tries to introduce new features in new smartphones. This time the company wants to play with front panel
Read Next: Samsung Galaxy S10 With 5G Support Is Expected To Launch In Q1 2019
Advertisement
Zainab SaeedLast Updated: Sep 7, 2018
Share
Facebook Twitter Pinterest
Advertisement