The Samsung Galaxy S9 launched with Android 8.0 in March is about to get the 8.1 update in the near future. A fresh Geekbench entry reveals that the Galaxy S9 will soon get the Android 8.1 Oreo update.

It is not confirmed that when the update will start rolling out. However, it is reported that it is in the works and is set to many all the changes. That include the much preferred option to automatically disable the fingerprint reader.

There is still no official words about the release of Android 8.1 for the Galaxy S9. 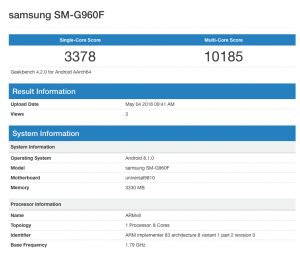 Below is the full list of the bundle changes in Android 8.1 Oreo:

Samsung is also planning to release the Android 8.1 Oreo update for the Galaxy Note 8 and Galaxy S9 Plus, along with some of its budget, mid-range and former flagship smartphones.
Read Next: Leaked Specifications of Galaxy S10 & Three Screen Foldable Galaxy X