We all know that Samsung had already launched the most important products it regularly brings to market in the second half of the year. Those devices include the new Galaxy Note series phone and a brand new smartwatch. The company has just announced another Galaxy event. The upcoming Galaxy event will be held on October 11. The event is just two days after Google unveils its new Pixel phones. The company unveiled that A New Galaxy Device is on its way to the market.

Samsung’s New Galaxy Device May Be A Camera Oriented Smartphone

LG, Huawei, and Google had already announced to launch their flagships in the coming October. Samsung is the fourth smartphone company that will reveal a major device next month. However, the invite doesn’t tell us too much about the upcoming device.

Samsung has just announced that the device will launch at the Galaxy Event. They further added that:

“It is bringing more ways to express yourself than ever before.”

The invitation also said that:

“We can capture the fun with Samsung as the company celebrates the launch of the new device.” 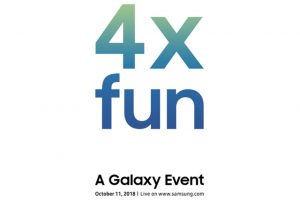 The “4x fun” tagline suggests that Samsung will launch a camera-oriented smartphone. Obviously, we can’t even be sure that it’s a phone that we’re talking about. It could be a new tablet as the invite has used the word “Device”. In addition to that, Samsung has not shared any info that can hint to the foldable phones. So, it will remain a mystery until its launch. The only thing we know is that something interesting is coming soon.