The award recognizes the SEA-ME-WE-5 Submarine Cable System & Consortium’s strong industry commitment, financial stability and technical know-how in developing one of the most ambitious and successful cable projects.

The 20,000-km SEA-ME-WE 5 cable system, spanning over 16 countries from Southeast Asia to Western Europe, is a technological breakthrough which marks a global communications milestone. It is designed with a capacity of 24 Terabits per second on 3- fibre pairs, fully capable of accommodating the future demand of data from other bandwidth-intensive applications such as enterprise data exchange, internet TV and online gaming.

When it is ready for service by the end of 2016, the SEA-ME-WE 5 cables’ advanced 100Gbps technology is expected to meet the quadrupling of bandwidth demand between Europe and Asia, providing the lowest latency and further enhancing the network diversity and resilience to the heavily loaded Asia to Europe route. In contrast with other submarine cable systems, the SEA-ME-WE 5’s main endpoints are carrier-neutral/open Points-of- Presence (PoPs) and not just Cable Landing Stations (CLS). 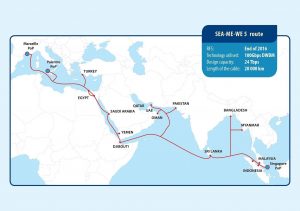 Over the past 11 years, the Global Carrier Awards have become the biggest and most prestigious awards event in the wholesale telecoms calendar. This year’s event was attended by more than 380 attendees. A record number of over 200 entries were submitted for this year’s awards. The winners were decided by a panel of over 20 judges, which include leading analysts, industry experts and Capacity‘s senior editorial team. They were aided by a new scoring system, which was refined to ensure that the shortlisting and winners decisions remained objective and transparent.