Skype is one of the most widely used platforms, but with the advent of video calling feature of WhatsApp, the usage of Skype has dramatically declined. Now, this app is mainly used by businesses in order to communicate with each other. If I say Skype has become more corporate and less casual, I won’t be wrong. Though it is not up to the mark messaging app but Microsoft is trying to include more features to it to make it better. Usually, the desktop and mobile version of Skype receive different features and updates, but some times they get the same features as well. This time the update to skype has brought a fantastic feature for both desktop and mobile versions. The name of the feature is Meet Now. Meet Now is a very useful feature as it allows you to invite people who are not using Skype.

Currently, we were only allowed to invite those people who are using skype. However, you would have many friends who are not using skype, but you want to communicate with them at any cost.  The latest features, Meet Now, facilitates users to create a meeting and invite anyone by just sharing the link. The link can be shared with anyone, including people who are not using Skype. 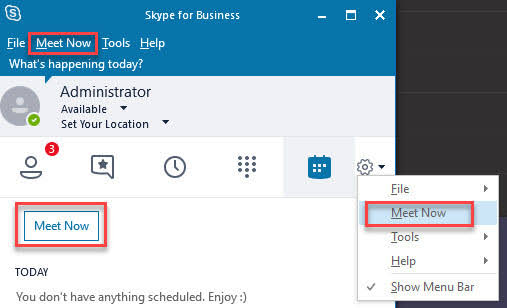 This feature is currently rolling out to Android and iPhone users in chunks, so if you are one of those people who are still not able to receive this feature yet, you will be getting it in some days. Skype has also made some camera improvements fro Android Users that make video calling more appropriate. The camera improvements also include document scanning and sending easier.