This project was announced two years back and approved by CM Shahbaz Shareef in March 2015 but delayed up til now. Recently Excise revealed that Smart Cards will be launched by November 2017.

Excise had invited bids for Automated Registration Cards (ARC) in April 2017. It is reported that the company is evaluating the bids technically and financially. It is also told that the contract will be awarded by the end of July.

Excise department demands that interested parties should have capacity to print 2 million cards per year as per demands of Pakistanis. As per Bidding documents, cards should be durable and able to store data for at least five years. 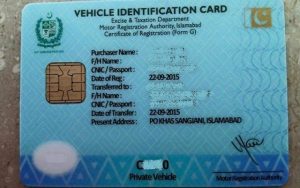 Around 2 million books are published every year out of which 1.6 million are issued for newly registered vehicles. Excise department revealed that the stock of these books will come to an end by November 2017.

Smart cards will be enclosed with Near Field Communication Chip which will verify the card details and will also display expiry date of the token tax. Lets hope that government introduce this new system as soon as possible so that we get rid of old registration books.