Previously, the sale/purchase of Xiaomi phones was restricted in Pakistan as they failed to fulfill all the legal requirements.

But now after official approval from Pakistan Telecommunication Authority (PTA), the Chinese company is all set to enter the Pakistani mobile market. The brand has agreed to all the requirements of PTA that are imposed on all companies.

SmartLink Technologies Becomes the Official Partner of MI in Pakistan

SmartLink Technologies proudly presents MI in Pakistan. It has been confirmed from an advertisement in Daily The News.

SmartLink Technologies will be the official partner for Xiaomi phones. Mobile phones and Eco products will also be launched in Pakistan soon. 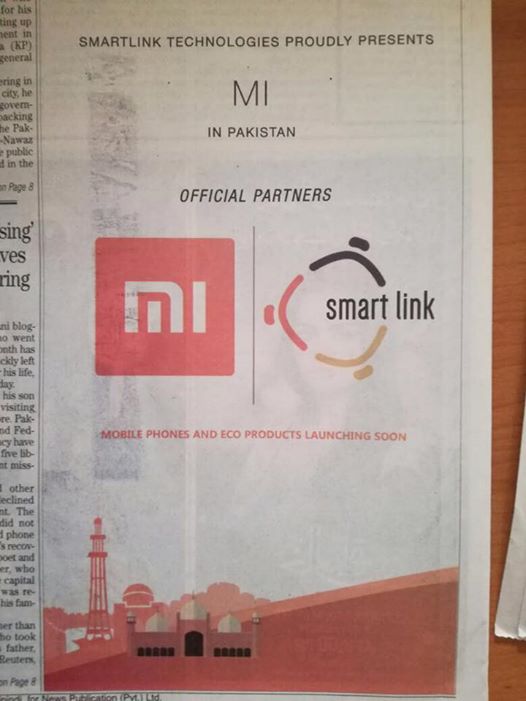 The Chinese company is the fourth largest cell phone manufacturer in the world. It has been a favorite mobile phone brand of many in both the local and international market. It has already launched its smartphones internationally.

Xiaomi is the Fourth Largest Cell Phone Manufacturer in the World

Xiaomi is all set to introduce its Mi series smartphones in Pakistan as a part of its initial announcement. But gradually all the smartphones will be launched in Pakistan.

The phones are economically priced smartphones. So it is anticipated that Xiaomi mobile prices in Pakistan will remain low as compared to other smartphone brands in the Pakistani mobile market.

So lets see when the phones will make their way to Pakistan.