As Pakistan is a third-world country with most people getting mediocre wages, so they can’t afford expensive smartphones and tend towards purchasing budget and mid-range smartphones. The devices from tech giant Apple are designed after months of R&D with the most sophisticated technologies while on other hand, the Android devices are being invented by a number of companies with less R&D who launch devices that target underdeveloped societies like ours. Therefore, we see that most indigenous people in Pakistan prefer an Android phone which is available in less price than Apple devices. Consequently, there is strong competition going on between those Android smartphone manufacturing companies. Keeping that in mind, we are going to mention some interesting data that will let you know the smartphone brand share in terms of Import units in Pakistan in 2020-21. 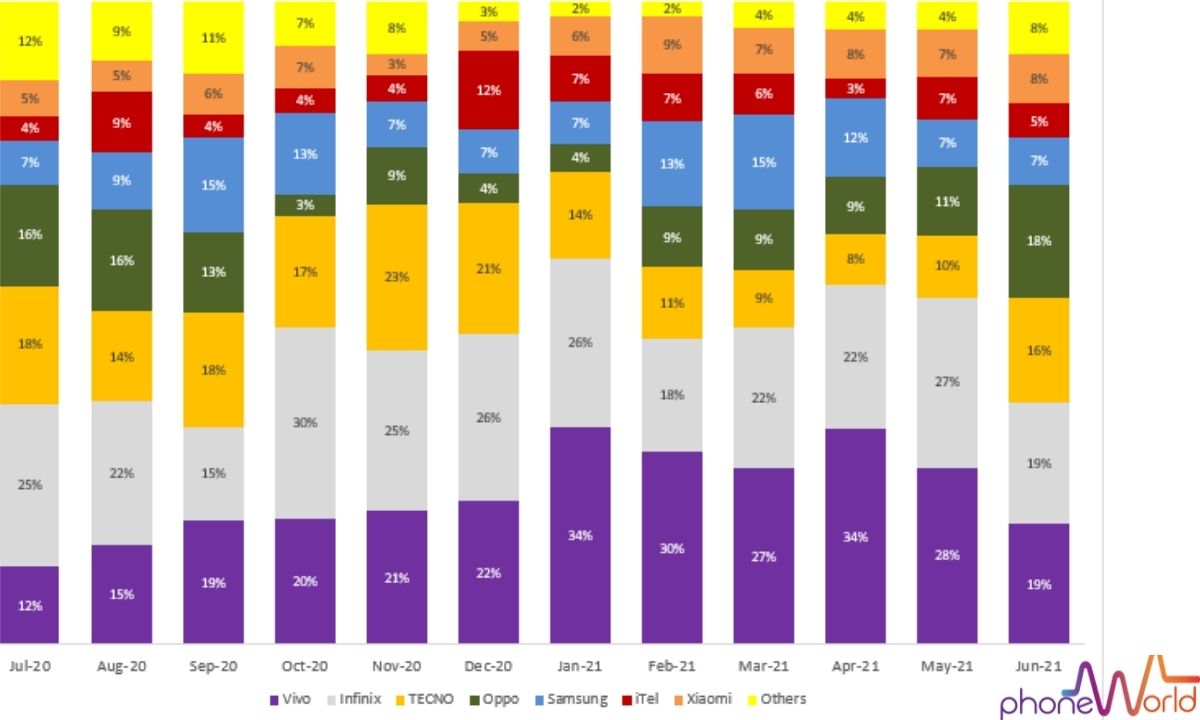 Vivo has imported the most number of smartphones in one year as compared to the other companies, So, I will begin with it.

As you can see in the above-mentioned chart, Vivo has been seeing vigorous growth in terms of import units from Jul 2020 to May 2021. However, it witnessed a bit of decline in June 2021 as its imports fell sharply by 10 percent in one month. The total number of smartphone imports from Vivo stood at 3,869,152 in one year from June 2020 to June 2021.

Infinix is also following a similar kind of a trend as vivo. Smartphone imports have been rising from June 2020 to May 2021. Though similar to vivo, its imports have witnessed a decline of 8 percent in June 2021. The total number of import units from Infinix stood at 3,774, 236.

Now moving on towards Tecno, the company has seen growth in the last half of 2020. The smartphone imports6 percent from the company kept on increasing from Jun 2020 till Jan 2021, however, from then on it has been seeing a decline. In June 2021, the imports have been slightly increased by percent. Overall, Tecno has imported 2,449,957 devices in one year (June 2020 – June 2021).

The trajectory of Oppo in terms of import units has remained a bit constant in one year. Though, the company has seen a decline in import units from Oct 2020 to Feb 2021. Apart from that, it has been witnessing a constant trend in smartphone imports. The total number of Import units from Oppo stood at 1,629,863 in one year (June 2020 – June 2021).

The tech giant Samsung has not been able to fully tap the Pakistani market because of the strong competition with other companies. However, the newly launched A series has made its mark in the market due to which the company’s imports have seen growth from Feb 21 to April 21. Apart from that, the company has seen a mixed trajectory in terms of import units. The total number of mobile phone imports stood at 1,595,346.

Unfortunately, the Chinese tech giant Xiaomi has also been unable to fully tap the local market of Pakistan though it has been amazing the users all around the globe. Though its trajectory has remained stagnant and has witnessed a slow growth in one year. Overall, the total number of smartphone imports from Xiaomi stood at 1,035,871.

Other smartphone brands include Huawei, Realme, Apple etc. All these brands have witnessed impressive growth in the first 3 months from Jun 20 to Oct 20, but afterward, they have been seeing a continuous decline. Overall, their cumulative smartphone imports have stood at 986,808 in one year (June 2020 – June 2021).

We accumulated the above-mentioned data after hours of research work and it is very credible. If you find our article or have any queries regarding it, do mention them in the comment section!