The smartphone market is transforming with each passing day due to the arrival of many brands mainly Chinese. And such brands are presently the growing economies across the world including India, Pakistan, Bangladesh etc. If we analyse last few years then we will come to know that Chinese smartphones are utterly entering these mentioned countries while focusing on the needs of mobile phone users and giving them affordable options.

Analyst firm Canalys, released a report on Indian smartphone market indicating its mobile phone stats. According to the report, no Indian mobile phone manufacturer brand appeared in the first five companies. The reason is the entry of some young Chinese brands and Samsung that has dominated the market during 2016.

Samsung and Chinese young companies kept on pushing their affordable yet innovative devices in the country that has untapped growth potential for smartphone sales; and made great progress.

Samsung led this competition by 22% share followed by Xiaomi with 11%, Oppo & Lenovo (both 9%) and Vivo (7%); according to Canalys report.

“In Q4 2015, Micromax, Intex and Lava took second, third and fifth place, accounting for almost 30% of the market. One year on and all three vendors have dropped out of the top five, with their collective share falling to around 11%.” 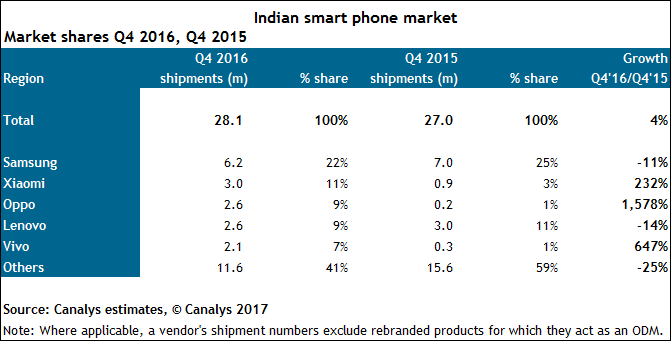 The sales of Indian brands had dropped by 25% during Q4 of 2016 and reached to 11.6 million. But it doesn’t mean that its all doom and gloom for India, rather the overall smartphone penetration has increased in the country by 18% during 2016.

Apple has not been mentioned in this report intentionally but it is doing best in India by shipping 2.5 million iPhones during 2016. Apple is even is talks to manufacture iPhones in India.

In a nut shell the report clearly indicates that its the time of the rise of Chinese smartphone brands across world. Now iPhone, Samsung, HTC, Sony etc. are not the only leaders as China is giving same options but on very cheap prices.

Pakistan must understand this changing trend in the smartphone industry. People here in Pakistan are more brand conscious hence there is dire need to bring unbiased mentality in common man. Chinese brands like Vivo, Xiaomi, Lenovo and Oppo are doing great job and with their arrival in Pakistan (except Oppo as it is already available in Pakistan) will truly depict a new era of cheap yet amazing smartphones in Pakistan.